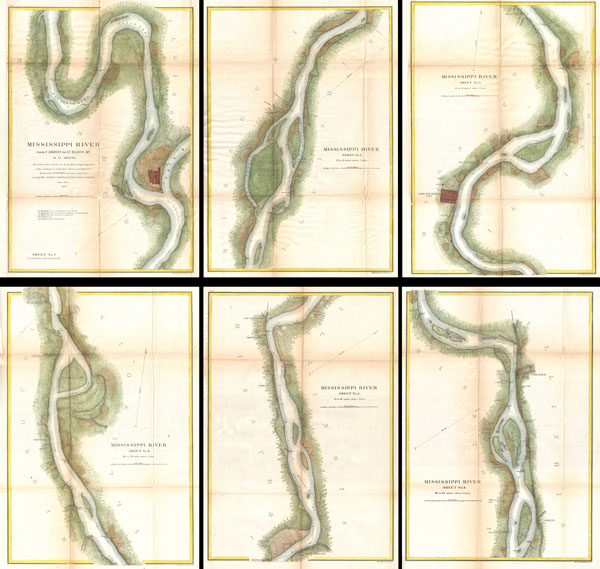 This is an important and rarely seen complete set of six charts from the 1865 U.S. Coast Survey mapping of the Mississippi River. Prepared by F. H. Gerdes, this map set details the territory from Cairo Illinois to St. Mary's Missouri. During the American Civil War this was a critical artery, the control of which would profoundly influence the course of the war. The cartographers of the United States Coast Survey, most of whom where Union men, understood that a proper mapping of the region was essential to control of the River. Gerdes spent part of 1864 preparing this map set for use by the Mississippi River Squadron, a flotilla of ironclads that would play a role in several important Civil War battles. Unfortunately, it is unlikely that Squadron ever actually saw these charts as it was disbanded in 1865, the same year the chart set was competed.

Each chart focuses on a particular part of the river, but in general are highly detailed with regard to the towns, navigation points, villages, plantations, critical resources, and farms that lined the river. Cairo, Cape Girardeau City, and of course St. Marys are exceptionally well detailed. Identifies the course of the Illinois Central Railroad as it enters Cairo. Sounding and a recommended course noted along the center of the river.

This map was surveyed by F. H. Gerdes and A. T. Mosman. The topography is the work of T. D. Bowie and F. W. Perkins. Drafted by J. B. Adamson. Published in 1865 under the direction of A.D. Bache, superintended to the U.S. Coast Survey. These important maps occasionally appear in separately, but rarely as a set.

Good. All sheets exhibit wear, discoloration, and verso repairs along the original fold lines - as is common with USCS Report maps. A couple of sheets have margin extensions.
Looking for a high-resolution scan of this?