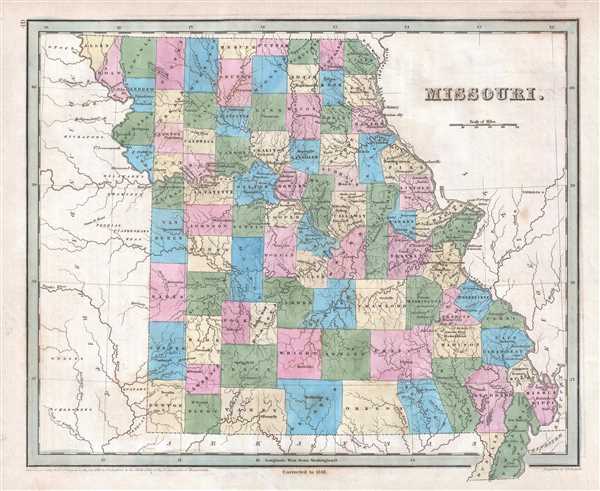 This is an 1846 Thomas G. Bradford map of Missouri. The map depicts the region from the modern-day states of Nebraska, Kansas, and Oklahoma, all labeled here as 'Indian District, to the Mississippi River, Illinois, and Kentucky, and from the Iowa-Missouri state line to Arkansas. Counties are illustrated, labeled, and shaded different colors to allow for easy differentiation. Each county seat is labeled, including St. Louis, Jefferson City, and Independence. A highly detailed, yet sparse map, Bradford renders explicitly apparent the lack of urbanization and modern methods of transportation in the state. Railroads did not begin to move into Missouri until the 1850s, thus this map predates railroad construction in the state. Rivers snake their way across the state, while the mighty Missouri and Mississippi are easily identifiable and meet just north of St. Louis.