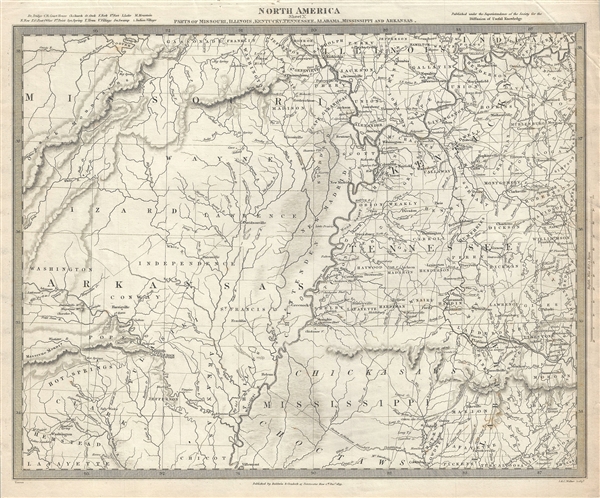 An attractive 1833 first edition example of the Society for the Diffusion of Useful Knowledge or S.D.U.K. map of Arkansas, Missouri, Mississippi, Kentucky, Tennessee, Alabama and Illinois. The map covers from St. Clair in Missouri to Hempstead in Arkansas and east as far as Breckinridge in Kentucky and Shelby in Alabama. Towns, rivers, mountains, Indian villages and topographical features are noted throughout, with relief shown by hachure. Identifies Little Rock, Hot Springs and Batesville among other important landmarks.

This map is part of A Series of Maps, Modern and Ancient, issued by subscription. Each folder in the series would contain a set of two maps bound together. The map accompanying this folder, not included here, was of the western part of India. Original folder includes the names of committee members of the ‘Society’, contents of numbers previously published, the folder number, which is this case is XLI, the contents and the printer and publication details. This map was printed by William Clowes and issued by the Society for the Diffusion of Useful Knowledge in their Dec 1, 1833 subscriber’s edition folder. The folder at the time was priced at 1 shilling plain or 1 shilling 6 pence colored. Published by Baldwin and Cradock.