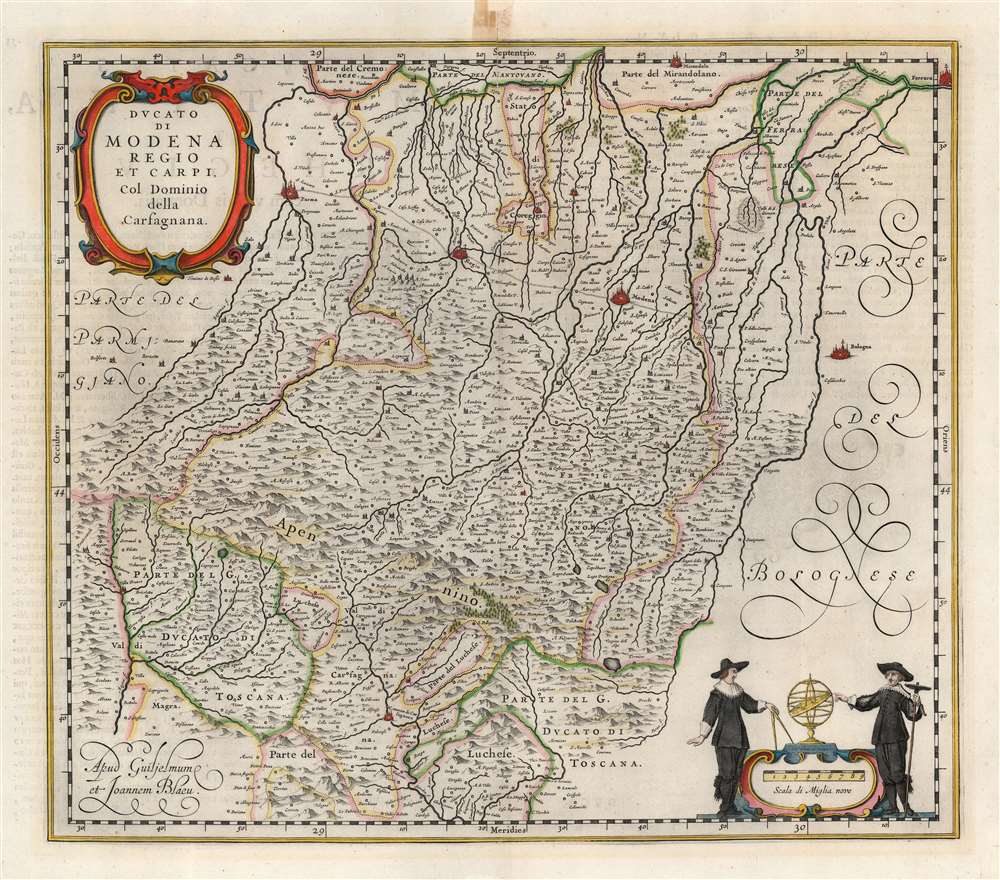 A beautiful, original color example of Willem and Joan Blaeu's map of the Emilia-Romagna region, focusing on the cities of Parma, Regio, and Modena. At the north and east extremes of the map, the cities of Mirandola, Ferrara, and Bologna are pictured as well. The superb copperplate is the product of the house of Blaeu at their height, with its delicately engraved cities, pictorially represented mountains and forests, and meticulously detailed cities, towns, and villages. Among its details is a road, connecting Parma, Regio, and Moden. The other regional maps would continue this road to Piacenza and Bologna, and beyond. Though not named, the course of the road corresponds to the Roman road known as the Via Aemilia.

From the First Atlas of Italy

The geographical detail is faithfully drawn from the identically-titled map drawn by Giovanni Antonio Magini, and published by his heir Fabio in 1620. Magini's posthumous work would stand throughout the 17th century as the most authoritative source for the mapping of Italy. This engraving, however, is executed with far greater skill than its source. Blaeu's fine work includes an elegantly framed title cartouche. A scale cartouche in the lower right is flanked by two geographers (identifiable by their tools - a compass, a backstaff, and an armillary sphere.)

This map was engraved by Joan Blaeu for inclusion in 1640 Atlas edition. The map appeared in all later editions of the Blaeu atlases, including Joan Blaeu's monumental Atlas Maior. The present example corresponds to the 1662 Latin edition of that work. It is well represented in institutional collections.

Blaeu, Joan, Atlas Maior, (Amsterdam: Blaeu), 1662.     In 1662 Joan Blaeu published his masterwork, which has been described as 'the greatest and finest atlas ever published' (Verwey, 1952): his monumental, eleven-volume Atlas Maior. This contained nearly six hundred maps, more than two hundred in excess of the Blaeus' mainstay the Atlas Novus. The former work already being renowned for the quality and beauty of its maps, Blaeu not only would add copious material but would improve the sophistication of his work: many of the newly-added maps utilized larger-sized presses and sheets, and the artistry applied to the engravings was often far superior to that of the earlier maps in the atlas - many of which by now were thirty, and some more than fifty years old. Blaeu's Atlas Maior was published from 1662 to 1672, consisting of some 594 maps compiled into upwards of 9 volumes with some editions containing as many as 12 volumes. This triumphant work's publishing life was cut violently short when, in 1672, the Blaeu's mammoth workshop was destroyed by fire; surviving stock would be sold at auction between 1674 and 1677, occasionally appearing under the imprint of later Dutch printers such as Pieter Schenk and Pieter Mortier. The maps added to the Atlas Maior, owing to their tragically short publishing life, are among the hardest-to-find of the Blaeu maps.