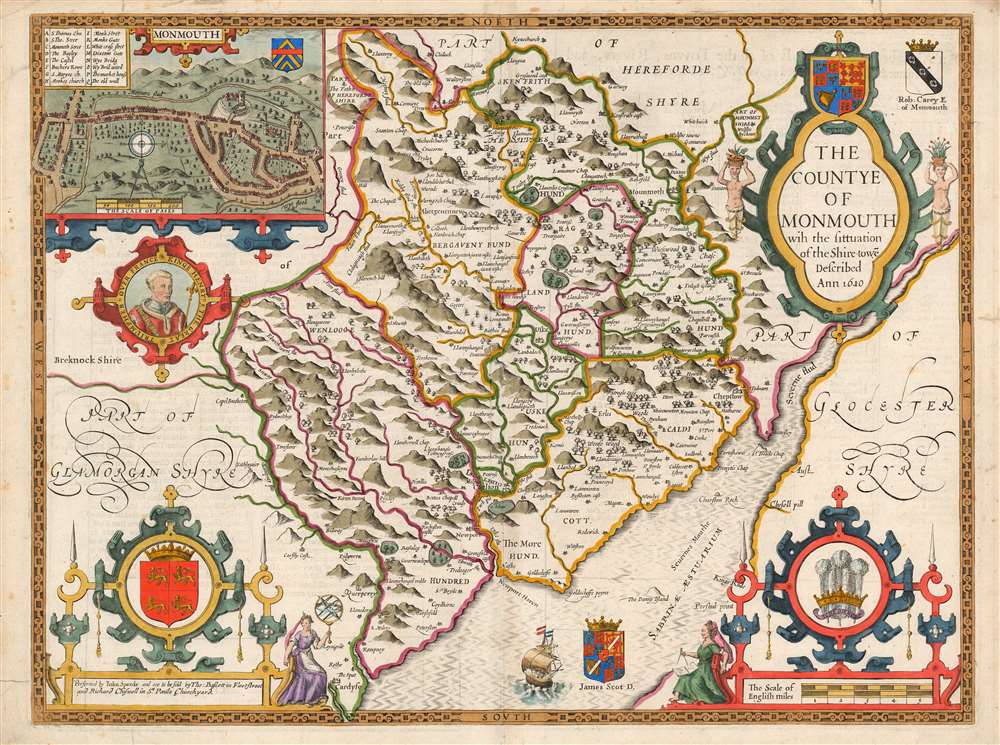 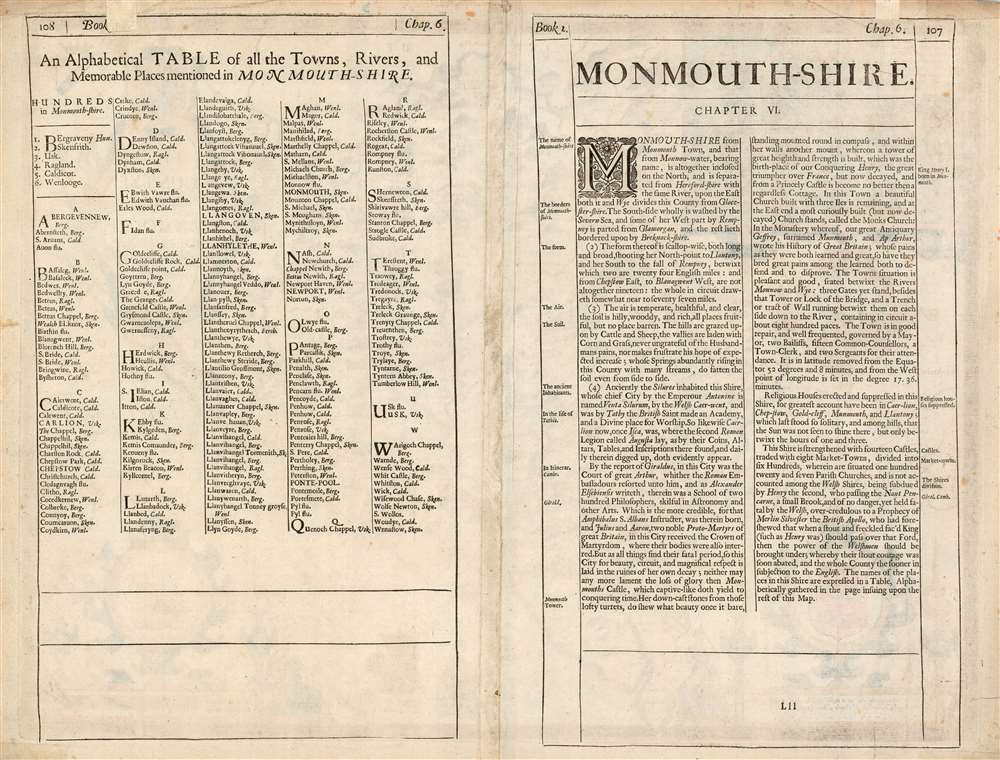 This is John Speed's map of the county of Monmouthshire, Wales. It was included in Speed's The Theatre of the Empire of Great Britaine. The map is richly detailed, showing towns, abbeys, castles, forests, and parklands. The countryside's rugged terrain is shown pictorially. An inset plan in the upper left details the castle and town of Monmouth. In it, a key labels the important streets, locations of the castle itself, St. Mary's Church, the town market, and the city's old wall and gates. Below the inset is a medallion depicting England's King Henry V (1386 - 1422), who was also known as Henry of Monmouth. King Henry's famed victories in the Hundred Years' War are celebrated in the medallion's text, 'Kinge Henry 5, The Great Triumpher Over France.' Henry's famous victory at Agincourt was nearly two centuries distant at the time this map was engraved: but those remote events had been made current by Shakespeare's 'Henriad' plays, which fixed Henry as the exemplar of the noble English war leader.

The map, as it was originally engraved in 1611, is decorated with the the Royal Arms of England (atop the cartouche) the arms of Gwynedd (in the lower left) and the badge of the Prince of Wales (in the lower right). Two escutcheons were added to the map, probably by Francis Lamb, in preparation for the 1676 Bassett and Chiswell edition of the atlas: these are the arms of Robert Carey, the First Earl of Monmouth (1560-1639), and of James Scott, (1649 - 1685) the First Duke of Monmouth and the illegitimate son of King Charles II.

The appearance of Monmouth's arms here coincide with the high point of Duke of Monmouth's career. His earned reputation as a libertine and a womanizer was tempered by his prowess as a successful and celebrated officer and commander. When he was made colonel of the His Majesty's Own Troop of Horse Guards in 1668, he was only nineteen. In the Third Anglo-Dutch War in 1672, he commanded a brigade of 6,000 English and Scottish troops sent to support the French army. By 1673 he was considered one of Britain's finest soldiers. In 1674, King Charles II had given him effective command of all of Britain's forces, and the great diarist Pepys made note of instances of the esteem in which the King held the young man. It was at this lofty height that Monmouth's arms were added to the map, and the comparison between the young, flamboyant Monmouth and the illustrious Henry V would have been considered apt. All this eventually fell apart. His popularity would lead him to claim his parentage to be legitimate, and a path to the throne of England. He was implicated as a conspirator in the 1683 Rye House Plot. Following King Charles II's death in 1685 Monmouth led a rebellion in an attempt to take the throne from his uncle, James II and VII. His forces were not equal to his reputation, and were soundly defeated by the regular army at the Battle of Sedgemoor on July 6, 1685. Monmouth fled, was ignominiously captured, and met a grisly end at the headsman's block on Tower Hill, July 15, 1685. The execution was botched by the infamously inept Jack Ketch, requiring as many as eight blows of the axe, horrifying even the hardened crowd that attended the event.

This map was engraved by Jodocus Hondius in 1611 for inclusion in John Speed's The Theatre of the Empire of Great Britaine, published in London by Sudbury and Humble in 1614. It continued in publication in the atlas in all its editions, including those that were bound together with Speed's A Prospect of the Most Famous Parts of the World. This example bears the imprint of Basset and Chiswell, whose edition of Speed's atlases was published in 1676. The plate was slightly reworked at that time, probably by Francis Lamb. Perhaps twenty-one examples of the separate map, in various editions, appear in institutional collections.

Speed, John, An Atlas of England and Wales. By J. Speed (Basset and Chiswell: London) 1676.