1961 U.S.G.S. Glacial Map of Montana, East of the Rocky Mountains 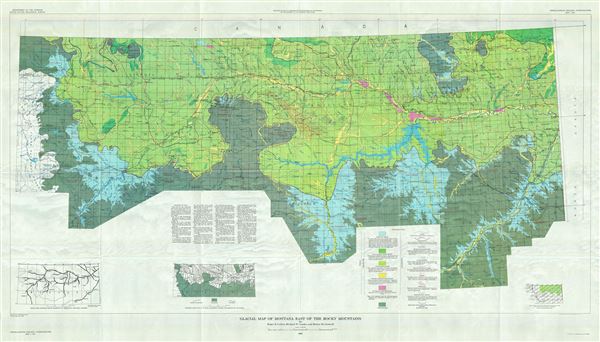 1961 U.S.G.S. Glacial Map of Montana, East of the Rocky Mountains

This is a beautiful 1961 map of Montana by the U.S. Geological Survey. It covers Montana east of the Rocky Mountains, from Lewis and Clark National Forest east as far as Richland and the Montana state boundary. The map is highly detailed and notes lakes, creeks, rivers, lakes, towns, and a host of other topographical features. Color coded to indicate glacial lake deposits, moraine deposits, ice-contact stratified drift deposits, outwash, inwash and terrace deposits and unglaciated areas, it also marks glacial advances, boulder train, etc. Three inset maps are included along the bottom margin including a sketch map showing major segments of preglacial drainage courses and glacial movement during successive ice advances. Includes a key in the bottom margin.

This map was based on the earlier U.S.G.S. Montana state map of 1923 and was prepared by Roger B. Colton, Richard W. Lemke and Robert M. Lindvall for the U.S. Geological Survey's Miscellaneous Geologic Investigations as map I-327.