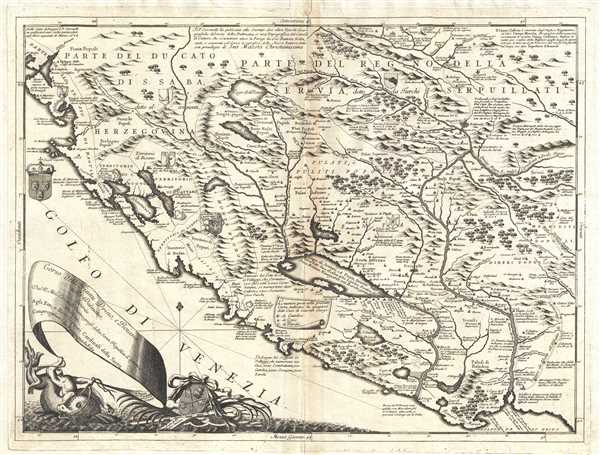 Detailed map of the Dalmatian Coast drawn during the Sixth Ottoman-Venetian War.
$1,000.00

This is Vincenzo Maria Coronelli's 1690 map of Montenegro. The map covers the Dalmatian coast from Dubrovnik to Gjiri i Drinit, including all of modern day Montenegro as well as parts of adjacent Croatia, Albania, and Bosnia Herzegovina. Most of Coronelli's maps of the Dalmatian coast were intended to highlight the military victories of the Venetian Republic over the expansive Ottoman Turks. No exception, this map features notations throughout referring to various military battles for control of this hotly contested region.

This map was created at the height of the Morean War, better-known as the Sixth Ottoman-Venetian War, which lasted from 1684-1699. Venice became a member of the Holy League, which consisted of the Habsburg Empire (Austria-Hungary), Poland, Russia, and Venice. This alliance was organized by Pope Innocent Xi to oppose the expansionist tendencies of the Ottoman Empire, following their attempted capture of Vienna in 1683. Upon joining the Holy League, Venice declared war on the Ottoman Empire, the first and only time that happened. Most of the fighting involving Venetian troops took place in Greece, with the Venetian goal of recapturing Crete and other territory previously lost to the Ottomans. Fighting in Dalmatia was intense. Several different cities were besieged, some multiple times. Much of the final border between Dalmatia and Bosnia and Herzegovina was determined by the end of the successful Venetian campaign.

As a whole this is a splendid example of Coronelli's distinctive style at its finest. The map features detailed engraving, historical notes, armorial vignettes, and an elaborate title cartouche complete with a cherub riding a sea monster with the title scrolled on the sail. The map was published for inclusion in Coronelli's stupendous 1690 Atlante Veneto.