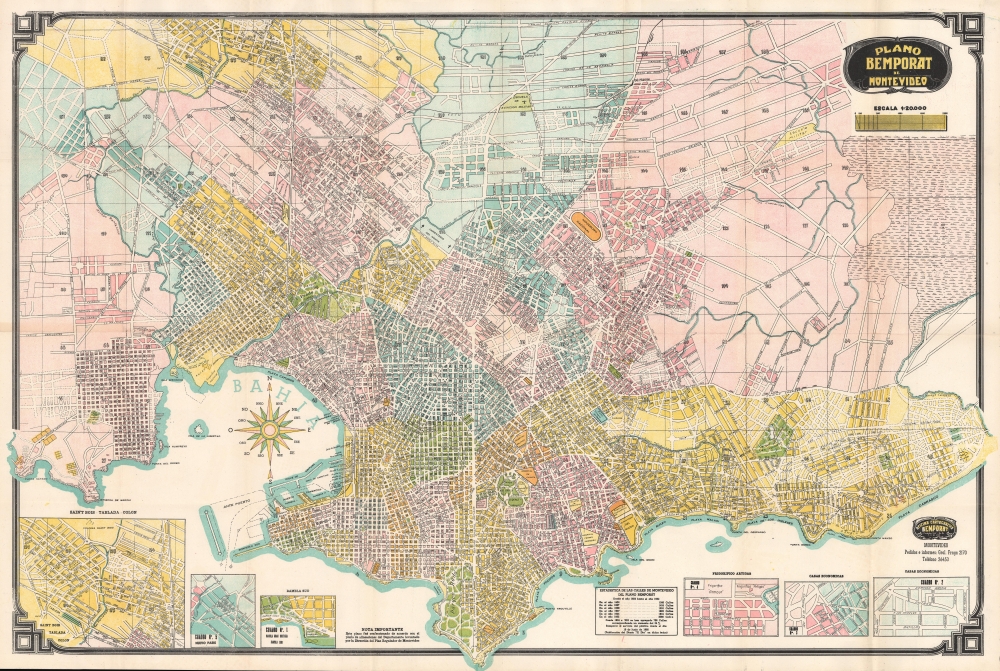 This is a beautiful large-format 1952 Oficina Cartográfica Bemporat folding city plan or map of Montevideo, Uruguay. Streets and avenues are labeled throughout, along with hospitals, schools, cemeteries, and parks. Beaches all along the coastline are identified. The Fortaleza General Artigas, the Frigorifico Uruguayo, and the Arsenal de Marina also are labeled. Six insets along the bottom border focus on the Casas Economicas, the Frigorifico Artigas, the Rambla Sud, Nuevo Paris, and Saint Bois - Toblada - Colon.

This map was created and published by the Oficina Cartográfica Bemporat in 1952. No examples of the 1952 edition are cataloged in OCLC, but editions from 1928 and 1939 appear in the database.

The Oficina Cartográfica Bemporat (1928 - 1970) was a publishing house in Buenos Aires, Argentina. Bemporat specialized in large folding city plans and specialized in plans of Buenos Aires. Their series of plans of Buenos Aires went through several revisions and is considered to be their most important map series. Bemporat also published city plans of Montevideo, La Paz, and Rosario, as well as a map of Argentina's railway network and several atlases. Learn More...