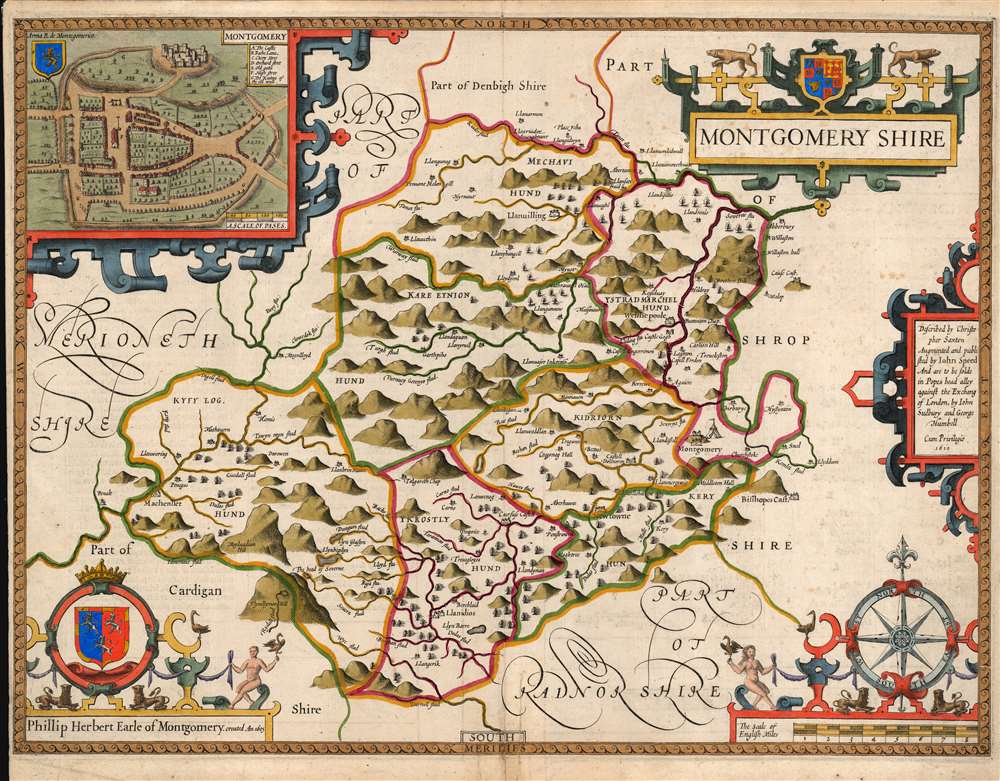 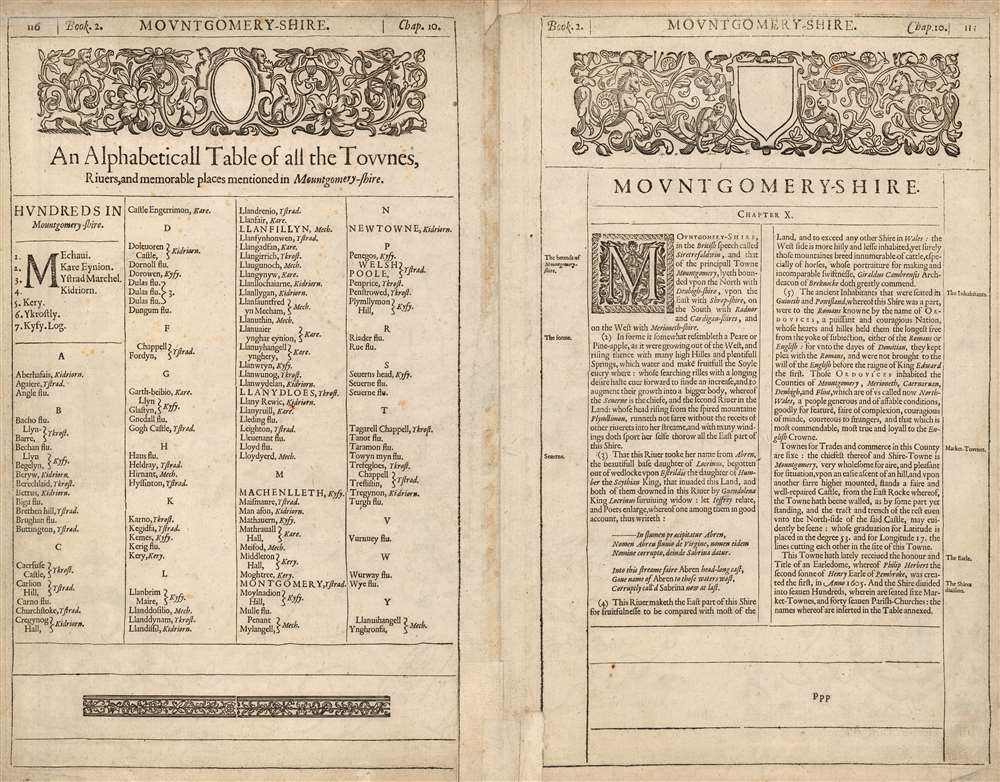 This is John Speed's map of the county of Montgomeryshire, Wales. Engraved in 1610, it was included in a 1646 edition of Speed's The Theatre of the Empire of Great Britaine. Speed derived this work from Christopher Saxton's extremely rare 1579 map of the county and added updated detail including the attractive town plan. The map is richly detailed, showing towns, abbeys, castles, forests, and parklands. The countryside's mountainous terrain is shown pictorially. An inset plan in the upper left details the castle and town of Montgomery. In it, a key labels the important streets, locations of the castle itself, and the city's wall (ruined since 1402.) The map includes a beautifully rendered compass rose, and the arms of Phillip Herbert (1584 - 1650). Herbert was the fourth Earl of Pembroke, and a favorite of King James I (1566 - 1625), who made Pembroke the Earl of Montgomery in 1605.

Montgomeryshire was an administrative county of Wales, the Lordship of Powys, a key border county between England and Wales. As part of the Laws in Wales Acts, it was converted into an English county. The town of Montgomery represented the center of English authority in the region. That said, the Welsh Cantrevs were frequently at war with one another, and the old walls of Montgomery were ruined in the sack of the town by Owain Glyndŵr in 1402. At the time this map was made, these were still ruined. The 13th century stone castle marked in the city plan survived until a few years after the printing of this map. Montgomeryshire had been royalist during the English Civil War, and was the site of the largest battle in Wales fought during the conflict. In 1649 the castle was deliberately dismantled to make it unusable in any future conflict.

This map was engraved by Jodocus Hondius in 1610 for inclusion in John Speed's The Theatre of the Empire of Great Britaine published in London by Sudbury and Humble in 1614. It continued in publication in the atlas in all its editions, including those that were bound together with Speed's A Prospect of the Most Famous Parts of the World. This example bears the Sudbury and Humble imprint, and typographically corresponds to 1646 editions of the Prospect. Perhaps sixteen examples of the separate map, in various editions, appear in institutional collections.


Christopher Saxton (c. 1540 – c. 1610) was an English cartographer. He produced the first county maps of England and Wales. His childhood and education is not well understood but he may have attended the predecessor school to Queen Elizabeth Grammar School, Wakefield and also Cambridge University. It is supposed that he learned mapmaking from John Rudd, the vicar of Dewsbury and Thornhill. He was commissioned to begin a survey of England, financed by Thomas Seckford of Suffolk, Saxton began the work in 1574; in 1577 he extended his survey to Wales. The first plates were engraved in 1574, and they were complete in 1578. The maps were produced in the Atlas of the Counties of England and Wales published in 1579. The atlas was popular and influential; cartographers including John Speed would add to and adapt Saxton's work. Saxton may have engraved the maps of the Welsh counties himself: the remainder of the atlas was engraved by Dutch and Flemish artists. Learn More...

Speed, John, The Theatre of the Empire of Great Britaine…, (London: John Sudbury and George Humble) 1646.