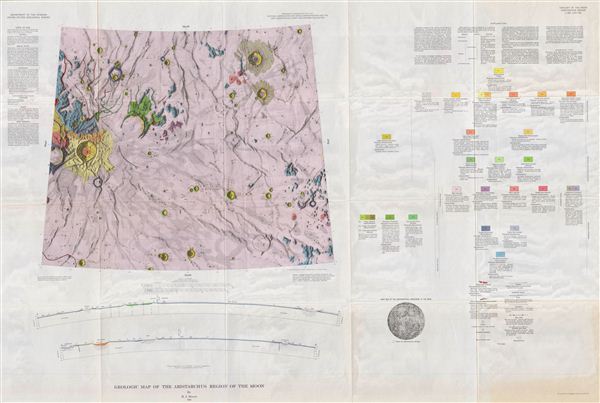 Details Aristarchus Crater, the brightest large formation on the moon.
$400.00

This is the U.S. Geological Survey's stunning full color geologic map of the Moon's fascinating and mysterious Aristarchus region. Deep in the dark expanse of the Ocean of Storms ('Oceanus Procellarum'), sits Aristarchus Plateau, pocked by Aristarchus Crater, the brightest large formation on the moon, visible to the naked eye on the northwest (or upper left) of the Moon's near side.

This mysterious region is the site of more ‘transient lunar phenomena' than any other on the Moon. Transient lunar phenomena are temporary obscurations, explosions, or color changes on the surface. And then there was the event of 1971. Apollo 15 was passing 110 kilometers above the plateau, when Aristarchus emited a burst of radioactive Radon-222 alpha particles. Selenologists say this was either a coincidental diffusion of gas to the surface, or a discrete explosion. An explosion leaves those with a taste in science fiction (which so often becomes science fact) to wonder: was something under the surface of the Moon attempting to communicate? Or destroy?

Fittingly, this map's rich, veiny colors suggest a fleshy, alien landscape. The map includes two sectional views (from the side) of the area, detailed ‘metadata' explaining the mapmaking methodologies and symbols employed, and an index map showing the area's location on the Moon.

Aristarchus was named after the Greek astronomer Aristarchus of Samos (310-c.230 BC), creator of the first known helio-centric model of the solar system, placing the Sun, not the earth, at the center of the solar system. The crater was so named by the Italian map maker Giovanni Riccioli in his 1651, The New Algamest,, in which he named craters after famous astronomers and philosophers. The name became an international standard when it was adopted by the IAU (International Astronomical Union) in 1935.

Created by H.J. Moore and published as plate I-465 in the United States Geological Survey's Geological Atlas of the Moon.