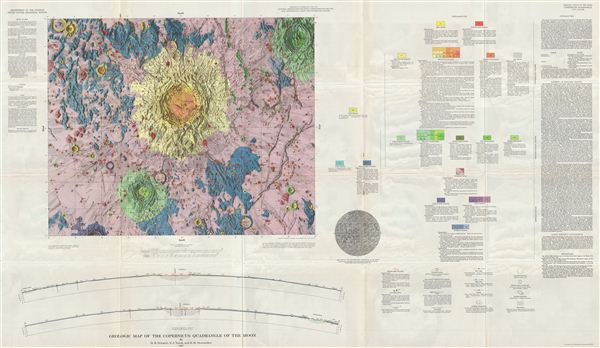 Map of the most prominent site on the moon.

A stunning full color geologic map of the Copernicus Quadrangle of the Moon from 1967, by the U.S. Geological Survey. Includes two sectional views (from the side) of the area, detailed text on the formation of the area's geology, extremely detailed ‘metadata' explaining the mapmaking methodologies and symbols employed, and an index map showing the location of this quadrangle on the Moon.

The map's feature names highlight this lineage: Copernicus, whose sun- or ‘helio'-centric model of the galaxy replaced, once and for all, the earth-centric model which had prevailed for centuries, and who is thus often credited as being the father of modern science; and Fra Mauro, the fifteenth century monk and maker of one of the most famous mappamundi in the history of cartography, a surprisingly accurate map of the known world circa 1450, compiled from european, Arabic and Asian sources.

Here, Copernicus is the name of the most observed and photographed crater on the Moon's near side, aka the 'Monarch' of the Moon. The Fra Mauro Formation is an ejecta blanket formed by an impact crater. It is believed that most of the moon's craters were formed approximately 3.9 billion years ago, during a period of intense bombardment in the Inner Solar System. The cratering rate fluctuates as collisions in the asteroid belt send fragment clusters into the Inner Solar System. This map might show hypervelocity impact craters caused by the same cluster of asteroids that, 65 million years ago, caused the extinction of the dinosaurs.

This map is a great companion piece not only to other maps in the Geologic Atlas of the Moon, but to early explorers' maps, and to Burritt's famous 1856 Atlas to Illustrate the Geography of the Heavens , one of writer H.P. Lovecraft's most prized possessions.

Created by H.H. Schmitt, N.J. Trask, and e.M. Shoemaker and published as plate I-515 in the United States Geological Survey's Geological Atlas of the Moon.

Very Good. Small stain on right outer edge.
Looking for a high-resolution scan of this?