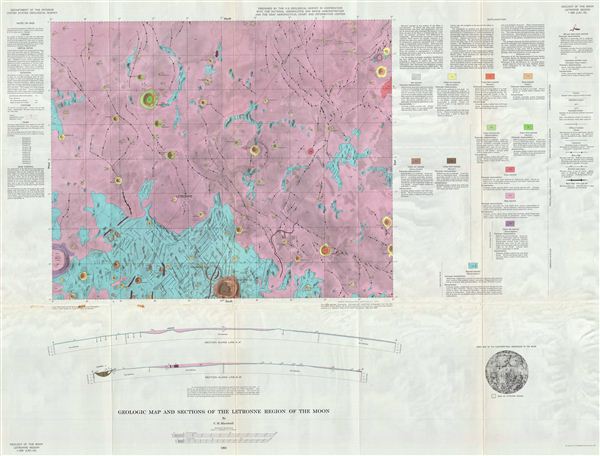 A stunning full color 1963 Geologic Map of the Letronne Region of the Moon by the U.S. Geological Survey. Letronne is a lava-flooded remnant of a lunar crater which forms a bay along the southwestern shore of the Oceanus Procellarum, or Ocean of Storms, as the northern part of its rim is completely missing. The map shows the large crater Gassendi, the flooded crater Billy, and the smaller crater Flamsteed. A wrinkle ridge traverses the floor from north to south, and further wrinkles outline a portion of the missing rim. This region is named after the French archaeologist, Jean Antoine Letronne (1787-1848 A.D.) who translated important works from ancient egypt.

The map also includes two sectional views (from the side) of the area, detailed ‘metadata' explaining the mapmaking methodologies and symbols employed, and an index map showing the area's location on the Moon. This map series represents a breath-taking leap forward not only in selenography (the study of the moon), begun in the late 1400s, but also in the record of humankind's fearless exploration of the world(s) around and beyond us.

Created in 1963 by C.H. Marshall and published as plate I-385 in the United States Geological Survey's Geological Atlas of the Moon.

Very Good. Small stain on fold
Looking for a high-resolution scan of this?