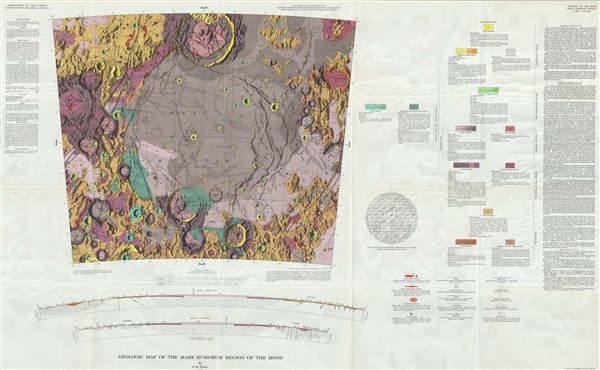 A stunning full color geologic map of the Mare Humorum Region of the Moon by the U.S. Geological Survey. The Mare Humorum, or 'Sea of Moisture,' is a small circular lunar mare about 275 miles across, connecting to the Ocean of Storms, or Oceanus Procellarum. The mountains around the mare mark the edge of an old impact basin, since flooded with lava. Adjacent to Mare Humorum is the large crater Gassendi, which was considered as a possible landing site for Apollo 17.

A lunar mare is a large, dark basaltic plain, formed by ancient volcanic eruptions. These dark spots were dubbed maria, or 'seas,' by early astronomers who mistook them for actual seas. These iron-rich plains are less reflective than the 'highlands' and thus appear dark to the naked eye.

The map includes a sectional view, detailed ‘metadata' explaining the mapmaking methodologies and symbols employed, and an index map showing the area's location on the Moon.

Created in 1967 by S.R. Titley and published as plate I-495 in the United States Geological Survey's Geological Atlas of the Moon.