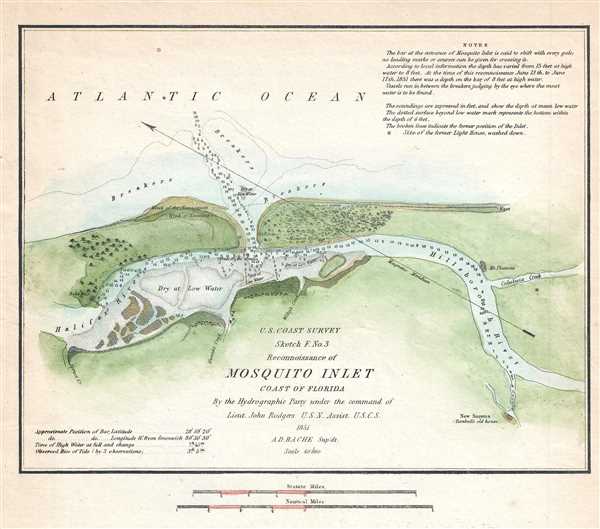 This is a beautiful example of the 1851 U.S. Coast Survey chart of the Mosquito Bay or Ponce de Leon, Florida. It depicts the Ponce de Leon Inlet, a natural opening in central Florida connecting the south end of the Halifax River and the northern end of Mosquito Lagoon. The name of the inlet changed from Mosquito Inlet to Ponce de Leon Inlet in 1926. Incredible inland detail in terms of topography is illustrated. Numerous depth soundings are noted along with coastal features. Navigation notes are also included and situated in the upper right corner.

Hydrography for this chart was conducted by a party under the command of Lieut. John Rogers. The whole was compiled under the direction of A. D. Bache, Superintendent of the Survey of the Coast of the United States and one of the most influential American cartographers of the 19th century and printed in the 1851 edition of the Report of the Superintendent of the United States Coast Survey.

Very good. Minor wear and overall toning. Minor foxing. Blank on verso.
Looking for a high-resolution scan of this?