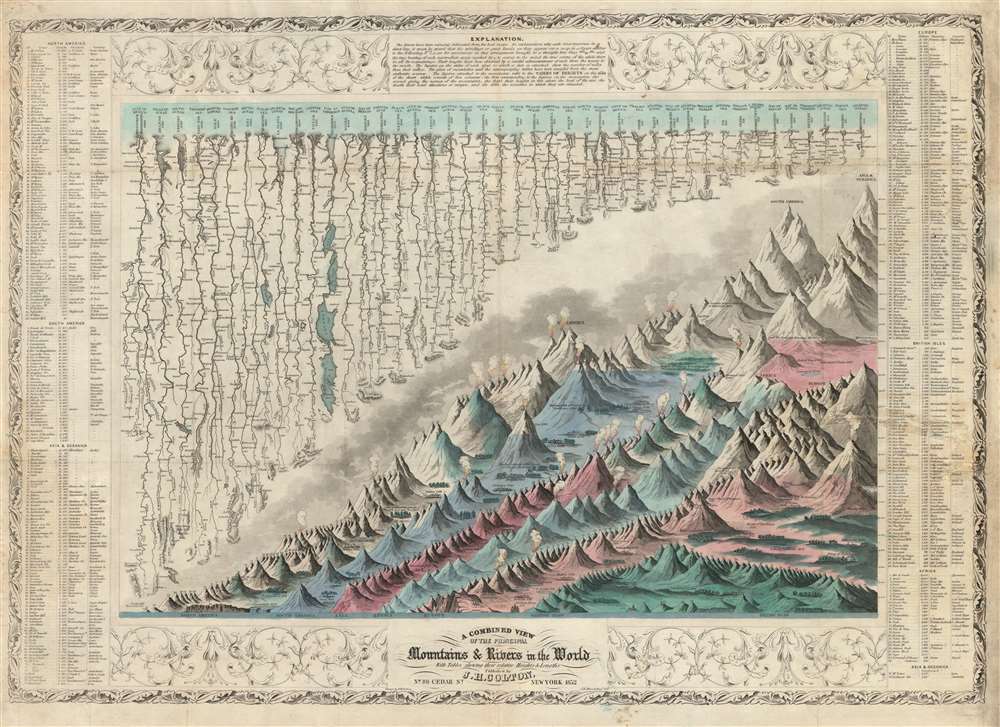 The first 1852 separate-issue edition of Colton's Mountains and Rivers chart. This is the earliest known iteration of Colton's iconic comparative infographic chart illustrating relative sizes of great mountains and rivers. The chart was subsequently reduced in 1855 and reissued in multiple editions for Colton's popular n his 1855 Atlas of the World and later in in Johnson's 1860 New Family Atlas. The map is surrounded by decorative embellishments and several layers of border. To the right and left of the map there is a table identifying the individual mountains via a numerical cross reference system.

This is the finest American Mountains and Rivers chart of the mid-19th century. It depicts the relative distances of the world's great rivers and the relative heights of the world's great mountains. Included are a multitude of details regarding the heights of important cities, glaciers, volcanoes, and tree lines. Also shows Niagara Falls, the Great Pyramid, St. Peter's Basilica in Rome and St. Paul's in London. The chart notes curiosities that would have been relevant at the time, such as 'The Greatest Altitude of the Growth of Peruvian Bark', 'The Glacier of Maladetts', the 'Table Land of Pamar', and the 'Greatest Altitude attained by Humboldt 19400 ft'. Replete with additional geographical errors and misconceptions common to the period.

The comparative mountains section, occupying the lower right half of this chart, details the principle mountains of the world. Ranges are color coded to show different types of vegetation and numerically reference tables surrounding the map. The elevations of several important cities including Paris, Rome, London, Geneva, Mexico, Bogota, and Quito, among others, are noted. There are also extensive notations on vegetation, volcanic activity, and lichen, much of which is no doubt influenced by Humboldt. The Himalayan peak Dhaulagiri is identified as the world's greatest mountain at 26,862 ft.

The upper left portion of this chart is dominated by the world's greatest rivers. Colton attempts not only to express the lengths of the various rivers, but also details regarding their course and sources. All along each river important lakes, cities, directions, and distance measurements are noted. Here the Mississippi is identified as the world's greatest river at some 4490 miles, followed by the Amazon at 3795 miles. The Nile comes up a sad fifth at just 3200 miles, although admittedly its full length had yet to be explored. This is a deviation from earlier comparative charts published in Europe which typically place the Amazon first, as the world's longest river - no doubt Colton's American pride coming out!

The map was drawn by J. H. Colton's son, George Woolworth Colton. The engraving is the work of John Atwood. The chart was first published in 1849 from Colton's 86 Cedar Street address in New York City. The present example is an 1852 edition, but we have discerned no alternations to the plate beyond the date. The first major revision of this map was for Colton's 1855 Atlas of the World. At that time, Atwood's plate was stripped of the decorative surround and textual borders to accommodate the smaller atlas format. The chart continued to be published, unrevised, in all subsequent editions of Colton's atlas through the late 19th century. When Colton partnered with A. J. Johnson in 1859, Johnson transferred Atwood's plate to lithographic stone, and published his own variant in the New Family Atlas until 1864, when he issued a completely different mountains and rivers chart.

Early separate issue examples of Colton's mountains and rivers charts are rare. The OCLC identifies only two examples, one at the University of Texas at Arlington, and another at Texas A and M. There is also an example in the David Rumsey Collection. We are aware of no other examples of the present 1852 issue.