1826 Bulla Comparative Chart of the World's Mountains and Rivers 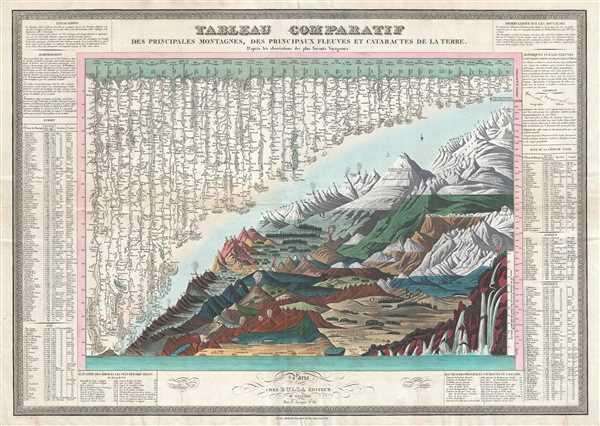 1826 Bulla Comparative Chart of the World's Mountains and Rivers

One of the earliest comparative mountains and rivers charts and the first to include waterfalls.

The comparative mountains section, occupying the lower right half of this chart, details the principle mountains of the world. Ranges are color coded to show different types of vegetation and numerically reference tables in the lower right quadrant. The elevations of several important cities including Paris, Rome, London, Geneva, Mexico, Bogota, and Quito, among others, are noted. There are also extensive notations on vegetation, volcanic activity, and lichen, much of which is no doubt influenced by Humboldt. The Himalayan peak Dhaulagiri is identified as the world's greatest mountain. Even the aeronaut ballooning feats of Frenchman Gay-Lussac who attained an altitude of 23,000 feet in 1808, and the Italian meteorologist, Pascal Andreoli and Carlo Brioschi, who rose to 27,000 feet over Padua, also in 1808, are noted

The upper left portion of this chart is dominated by the world's greatest rivers. Bulla attempts not only to express the lengths of the various rivers, but also details regarding their course and sources. All along each river important lakes, cities, directions, and distance measurements are noted. Here the Amazon is identified as the world's greatest rive, followed by the Mississippi. The Nile comes up a sad sixth, although admittedly its full length had yet to be explored.

This is the first appearance of waterfalls on a comparative mountains and rivers chart. As the great waterfalls of South America and Africa remained as yet largely unknown in European intellectual circles, most of the focus is on European waterfalls with the Chute de Gavarnie identified as the world's greatest cascade.

We have identified at least two variants of his chart, but the plate seems identical. One was issued by Bulla et Fontana, the other by Chez Bulla. It is unclear which appeared first, or if they appeared simultaneously as all are assigned to 1826. Today examples of Bulla's charts are extremely rare.

François Bulla (fl. c. 1814 - 1855) was a French engraver, printmaker, lithographer, and printer. Born in Tessin, Bulla opened his business at 98, Rue du Temple around 1814 and moved to 38, Rue Saint-Jacques in 1821. Bulla published a catalog of his work in 1838 entitled Catalogue général des estampes et lithographies compost le fond de F. Bulla, éditeur, quaint Saint-Michel, 25 that was printed by the Imprimerie de Ducessois. Bulla's business was described in the Bazar Parisien in 1826 in this manner:

Charles Picquet (April 15, 1771 – January 15, 1827) was a French cartographer active in Paris during the Napoleonic and post-Napoleonic Eras. Picquet was born in Romagna-sous-Montfaucon, Meuse, France. From about 1798 Picquet supplied maps to the Dépôt de la Guerre. From 1806 he was appointed to Napoleon's Cabinet Topographique. Being politically dexterous, he was able to retain this position after the fall of Napoleon under both Louis XVIII and Charles X. Under Louis XVIII he also obtained the Brevet de Géographe Ordinaire du Cabinet Topographique. He worked with the cartographer Adrien-Hubert Brué on a major atlas project. When Charles Picquet died in 1827, his son, Pierre-Jacques Picquet, continued to publish under his father's imprint name well into the middle part of the 19th century. Learn More...