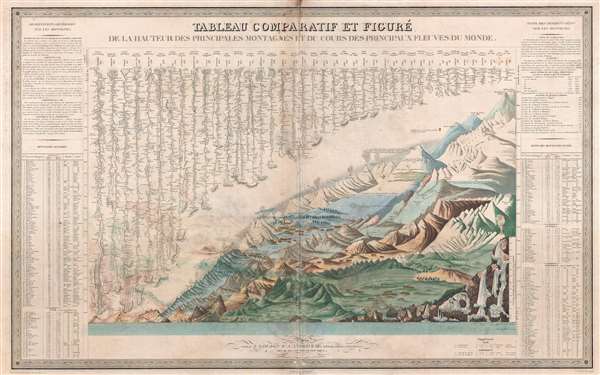 The comparative mountains section, occupying the lower right half of this chart, details the principle mountains of the world. Ranges are color coded to show different types of vegetation and numerically reference tables to the left and right of the chart proper. The elevations of several important cities including Paris, Rome, London, Geneva, Mexico, Bogota, and Quito, among others, are noted. There are also extensive annotations on vegetation, volcanic activity, and lichen, much of which is no doubt influenced by Humboldt. The Himalayan peak Dhaulagiri is identified as the world's greatest mountain. A waterfall chart occupies the extreme bottom right with the Pyrenean waterfall of Gavarnie identified as the world's highest.

This is a rare opportunity to own one of the finest comparative mountains and rivers charts to appear in the 19th century. It was prepared for issue in Andriveau-Goujon's Atlas de Choix ou Recueil de Cartes de Geographie Ancienne et Modern. There are several states of this map, some of which are dated as early as 1829, but there is little difference in actual content between states.

Good. Some wear and damage along original fold line, especially at upper margin near centerfold. Some soiling and color transference. Backed on archival tissue.