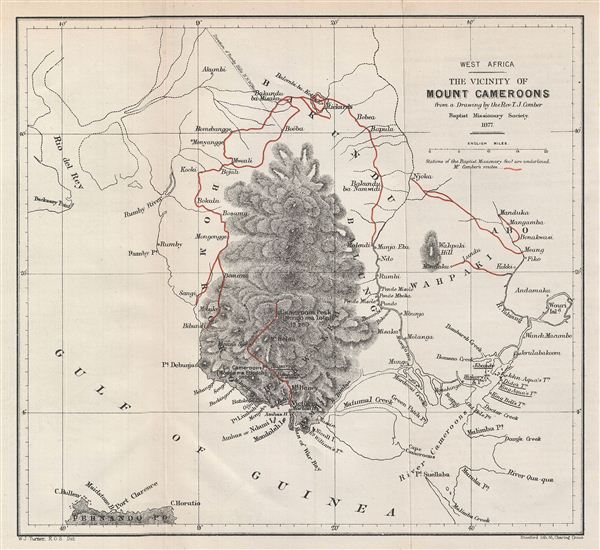 This is a fine example of the 1877 Stanford Map of Mount Cameroons and vicinity, West Africa. Centered over Mount Cameroon, the map covers from Rio del Rey to the Fernando Po (Bioko) Island. Based on the Drawing of Rev. T. J. Comber, a Baptist missionary to Cameroon, who later explored the various rivers of the Congo Basin, the map identifies various springs, rivers, lakes, peaks, hills, villages and various other topographical details. One of the largest and active volcanoes of Africa, Mount Cameroon rises to 13,255 ft. Various routes to ascend the Mr. Cameroon and several Baptist Missionary Society stations are noted. Relief is shown by hachure. This map was drawn by A. K. Johnston and published by e. Stanford with contributions by W. J. Turner, as part of the Proceedings of the Royal Geographical Society and Monthly Record of Geography, Vol. I, in 1879.