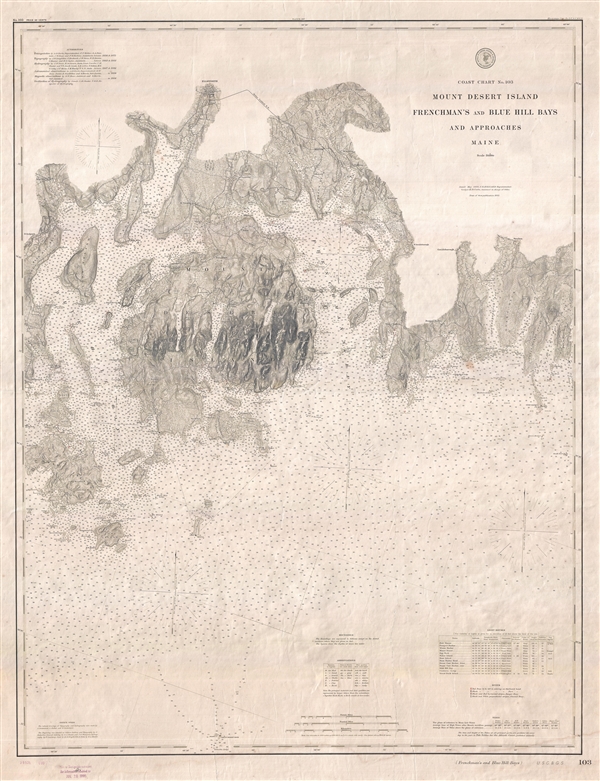 A very rare independently issued 1883 (updated to 1895) U.S. Coast and Geodetic Survey nautical chart of Mount Desert Island and the adjacent Frenchman Bay and Blue Hill Bay. The map covers from North Sedgwick eastward as far as Pigeon Hill Bay, and from Ellsworth to the light on Mount Desert Rock and Columbia Ledge. Nearby Swan Island, Long Island, Black Island, and Placentia Island, among others, are included. The map, while primarily a nautical chart, is exquisitely detailed throughout, showing significant inland deal with regard to topography and even the placement of individual buildings. There are countless depth soundings throughout. In the lower right hand quadrant there are noted on light houses, buoys, tides, Soundings, and other information important to the mariner.

The initial triangulation work for this map began in 1856 under A. D. Bache. It was updated and revised in 1875. The topography was completed between 1862 and 1881. The hydrography was done between 1867 and 1882. Additional astronomical and magnetic observations were completed in 1856. This chart was first issued in 1883. The present example bears a stamp in the lower left margin suggested it was updated to 1895. This map is a used sailing chart and bears the tell-tail signs of that use. It is notably on thick stock and was issued independently. This map is rare with no record on the market in recent history.

Good. A couple of closed tears at bottom of map, repaired on verso. Some minor toning and wear related to shipboard use. Else a very nice.