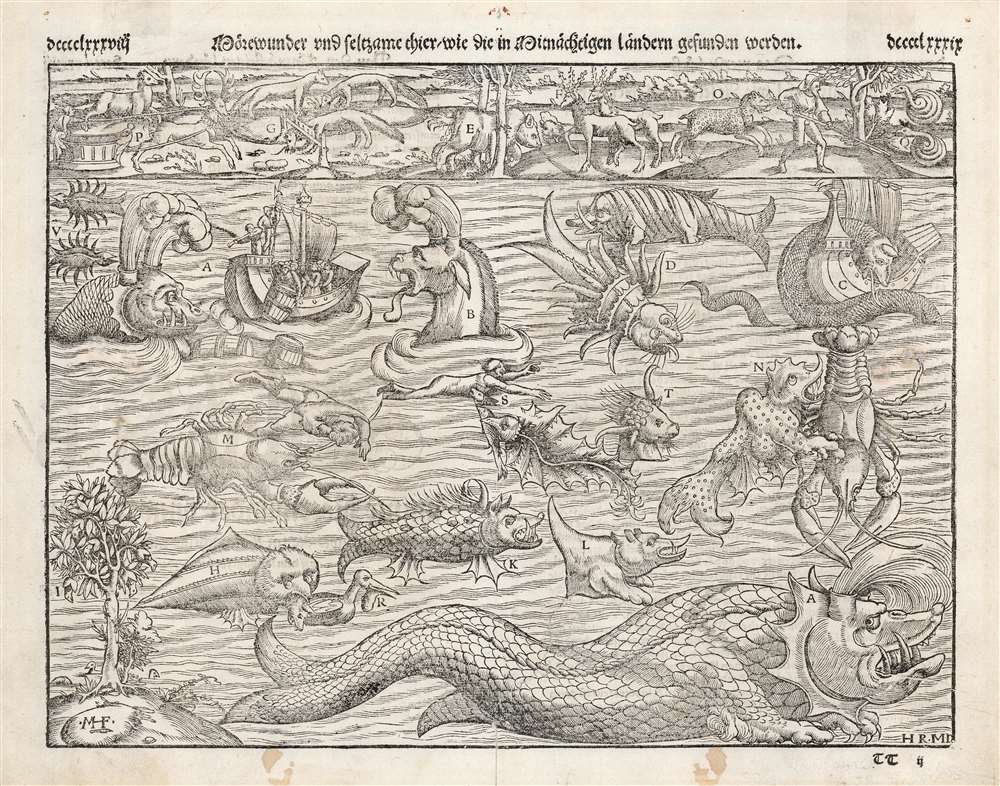 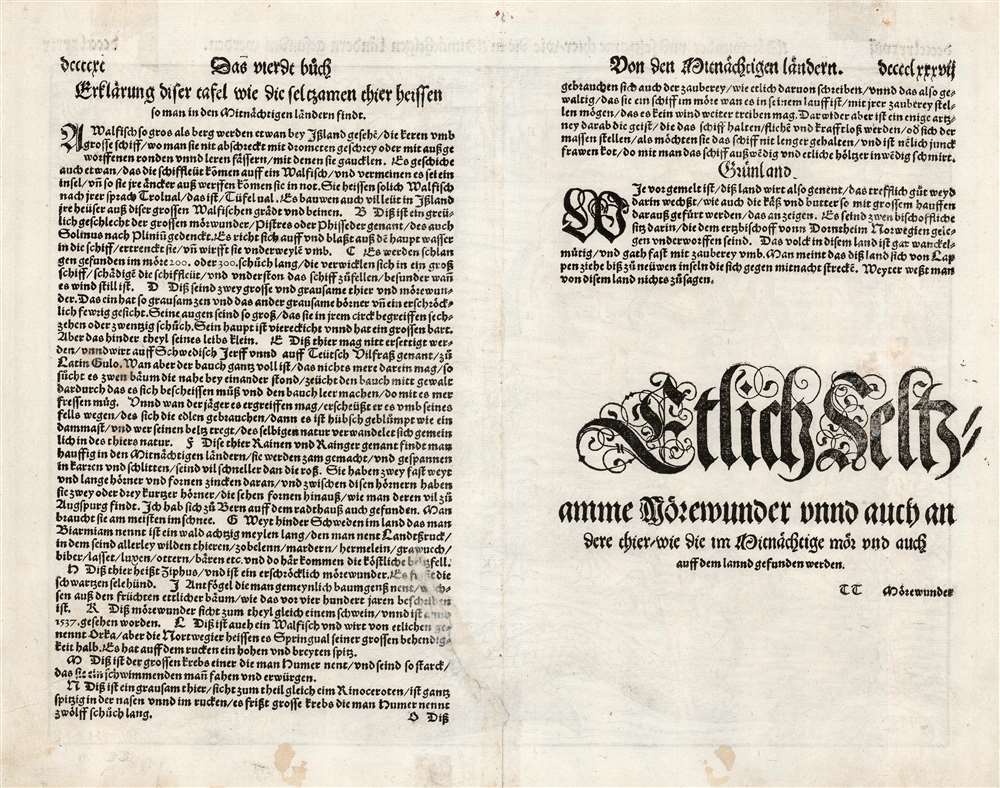 An attractive 1558 printing of what is often euphemistically referred to as Munster's Monsters, this is Sebastian Münster's bestiary of sea serpents and other astonishing monsters, some fictional, some real. The image first appeared in the expanded 1550 editions of Munster's Cosmographia, a work which for more than half a century provided the European literate layperson their best source of information about the world. Most of the beasts here are derived from a 1539 map of Scandinavia by Olaus Magnus. As fanciful as these creatures may appear, many depict factual creatures that Scandinavian sailors and whalemen occasionally encountered. Among the more recognizable beasts are various forms of whales with obvious blowholes, at least two enormous lobsters, a sea serpent (possibly an oarfish), the whale fish (possibly an Orca), and something that might very well be a walrus. Of course, there are fictional sea monsters too, including a pig faced sea beast, apparently seen by sailors in 1537, and the Sea Buffalo, something that looks like a cross between a bull and a fish.

Although one's attention is drawn to Münster's sea creatures, his map also illustrates land based fauna, most of which are far more realistic. These include reindeer, beavers, sables, bears, a wolverine, snakes, and what might be some sort of large cat. In the lower left, there is a tree populated by 'duckbirds,' a curious kind of avian that Munster claims 'grows on trees' but which, in his lifetime, had not been seen for some 400 years.

This fantastic image does not appear in Munster's work prior to 1550. Munster himself constantly labored to build the work until his death by plague in 1552, both adding to the text as well as ordering the production of improved city views and decorative woodcuts. 1550 saw the addition of this cut, along with the first full-sheet city views to appear in the body of the work, as opposed to the 'foretext' maps that appeared from the book's inception. This woodcut was composed by the Swiss artist Hans Rudolf Manuel Deutsch, who produced many of Munster's woodcuts. The actual formschneider is unknown beyond his initials, M-F, which appear along with Deutsch's 'HR-MD.'

Revealing the Wonders of the World

Munster's Cosmographia was a popular work, and as many as fifty thousand were printed. While many of these did not survive, individual maps do appear on the market from time to time. The separate woodcut is neglected in institutional collections, although the full work is well represented. The pagination of this specific example is consistent with all German editions of Cosmographei between to 1550 and 1558. It exhibits a typographical variation in the verso suggestive of this having been printed for the 1558 edition specifically.

Good. Mended tear at bottom to right of centerfold with virtually no impact on image. Two minor marginal stains. Else very good with a bold, sharp impression.