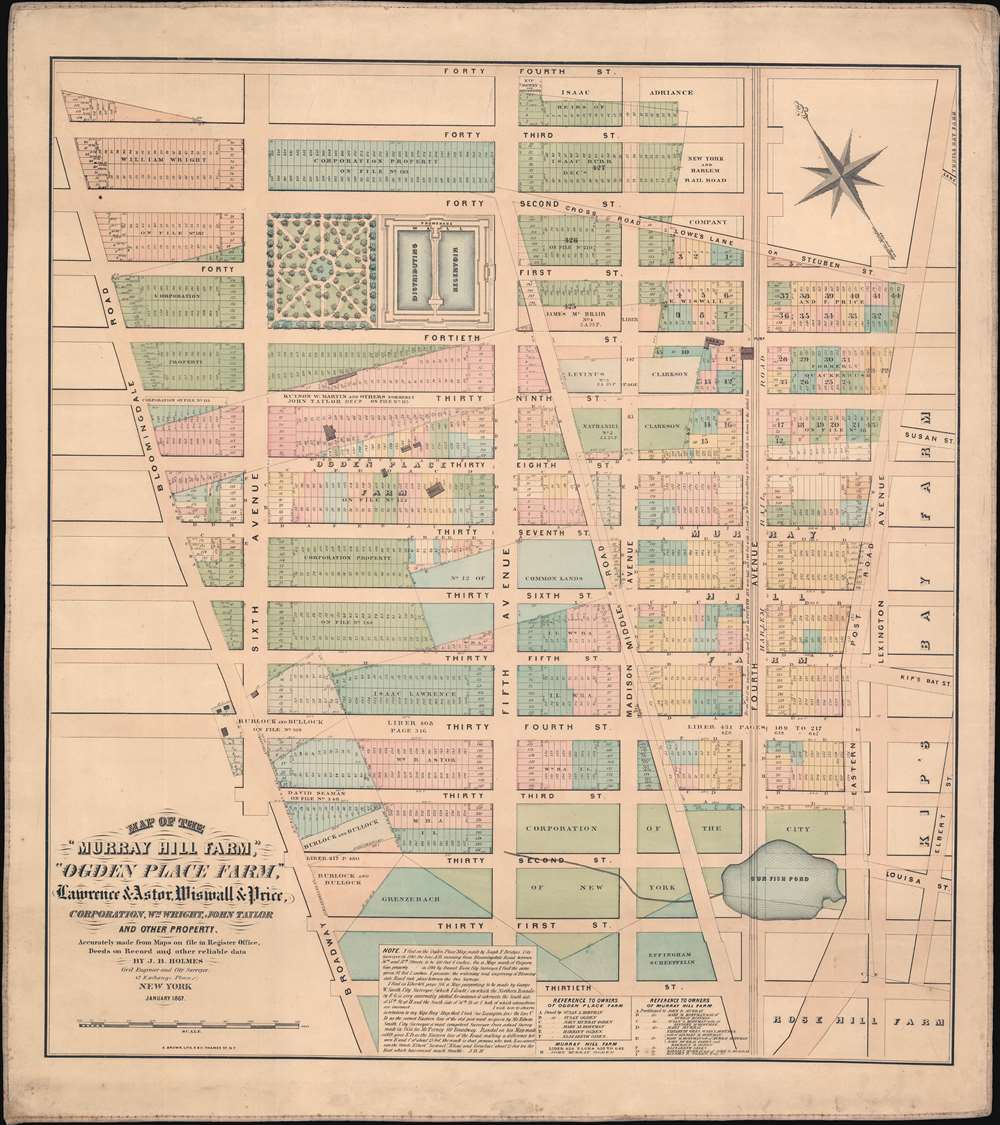 This is one of a series of more than 50 maps prepared by Holmes to illustrate the early farms, inheritance, and topography Manhattan. Here, as the map's title suggests, Holmes identifies the large 'Murray Hill Farm,' as well as 'Ogden Place Farm,' and smaller land holdings associated with Lawrence, Astor, Wiswall, Price, William Wright, and John Taylor.

The Murray Hill Farm is named after Robert Murray (1721 - 1786), an 18th century Quaker shipping magnate. Murray leased the vast tract of land between Broadway and Lexington, 30th and 38th Street, from New York City in 1762. At the highest point on his new property, a since flattened glacial till soon to be known as Murray Hill, he built a sprawling manor house called Inclenberg. The Murray family retained the property throughout the Revolutionary War (1775 - 1783). When the British invaded New York City, the family matriarch Mary Lindley Murray is credited with delaying British commander William Howe. Through her feminine wiles, Mrs. Murray enticed Howe and his officers to tea at Inclenberg, thereby giving the American freedom fighters ample time to make a quick retreat.

Ogden Place Farm was situated just to the northeast between Broadway (Bloomingdale Road) and Madison Avenue, 39th street and 34th street. This gentlemanly estate, build by William Ogden on land rented from the city, was the site of the gothic castle Waddell Villa, a hub for New York City elite social life well into the 1850s. The farm was partially partitioned among the heirs of William Ogden in 1838. The remainder of the farm was further partitioned by the city and sold as 187 individual lots in 1840.

The remaining farms, associated with notable New York City families like Astor, Lawrence, Wiswall, Price, Wright, and Taylor, were similarly reverted to Common Lands and sold as lots in the first half of the 19th century following the issue of the 1811 Commissioner's Plan and the solidification of the Manhattan street grid.

In the early 19th century most of Manhattan was undeveloped farmlands, the property of wealthy landowners with claims dating to the New York's Dutch 'New Amsterdam' period. The northern two thirds of Manhattan was dotted with farms and sprawling gentlemanly estates, many with great manor houses overlooking the Hudson River. The Commissioner's Plan of 1811, and the 1807 Commission Law, laid the street grid through many of these properties and gave the city the right to claim these lands under eminent domain, providing compensation to the landowners. While this work occurred early in lower Manhattan, central and upper Manhattan were not formally acquired by the city until the mid-19th century.

Holmes became fascinated by the early history of Manhattan real estate ownership, recognizing a business opportunity in accurately understanding the history of city land ownership, division, and inheritance. Moreover, Holmes allied himself with the corrupt Tweed administration, assuring himself and his allies even greater wealth and political power from the eminent domain seizure of old Manhattan estates. Holmes created a series of maps, reminiscent of John Randall's 'Farm Maps', overlaid with property data, showing the borders of old estates, and notating the breakup of the lands among various heirs. The complex work of compiling the maps earned Holmes a fortune, with one newspaper suggesting on his death in 1887 that some of his individual maps were worth more than 30,000 USD. There is no complete carto-bibliography of Holmes' maps, but we believe there to be at least 50 maps, possibly more.

This map was issued by John Bute Holmes in in January of 1867. It was engraved and lithographed by Arthur A. Brown. Like all Holmes work, this map is rare. There is at least one copy at the New York Public Library, as well as examples at the New York State Library, Columbia University, and Princeton University. We are aware of at least two examples in private hands. Rare.