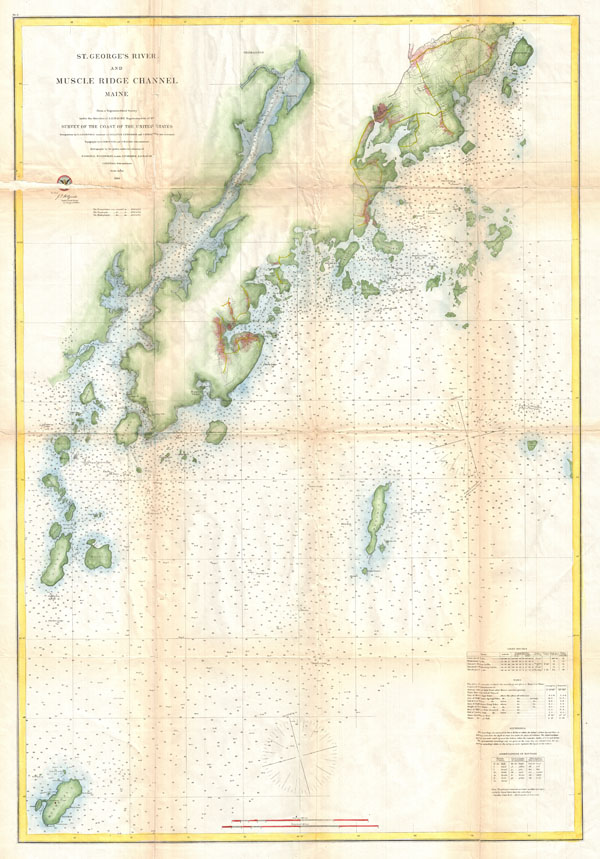 A rare 1864 nautical chart of the Maine coast from Thomaston, MA to Monhegan Island, including the St. George's River and Muscle Ridge Channel. Offers minimal inland detail but a wealth of nautical information including countless depth sounding and notations on the many offshore shoals and other dangers in the region. The lower right quadrant features extensive notations on tides and light houses.

The triangulation for this chart was accomplished by G. A. Fairfield, J. A. Sullivan, F. P. Webber and C. F. Ferguson. The topography is the work of C. Ferguson and F. W. Door. The hydrography was completed by a party under the command of E. Cordell, W. S. Edwards, F. P. Webber, R. El Halter and C. Fendal. Published under the supervision of A. D. Bache for the 1864 Report of the Superintendent of the U.S. Coast Survey.

Report of the Superintendant of the United States Coast Survey, Washington, (1864 edition).

Good. Verso reinforcement and repair on many of the original fold lines. Blank on verso.
Looking for a high-resolution scan of this?