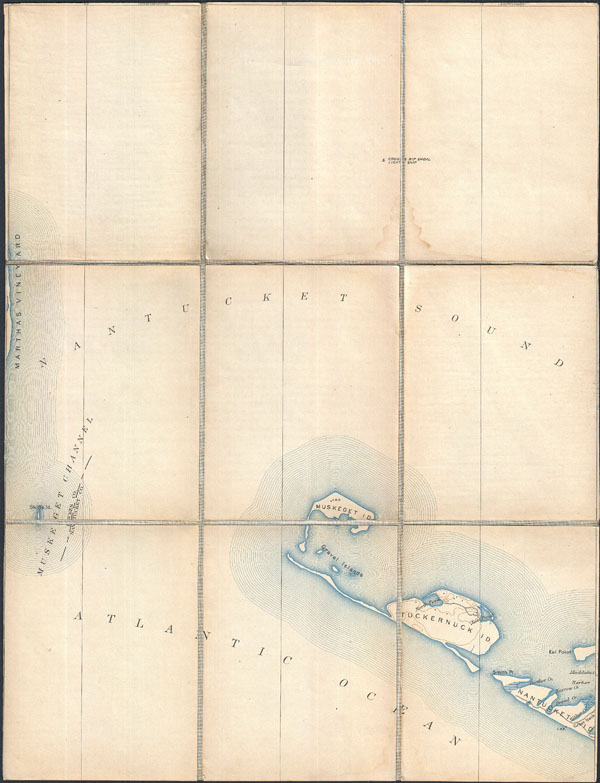 This is a rare example of the c. 1887 U.S. Geological Survey map of the Muskeget Channel. Extends eastward from Marthas Vineyard to include Muskeget Island, Tuckernuck Island, and the eastern parts of Nantucket. Offers copious topographical detail as well as some submarine detail as well as towns, roads, and some individual buildings. This map was originally dissected and mounted on linen by the Old Corner Book Store of 27-29 Bromfield Street, in Boston Massachusetts.


The Old Corner Book Store (1828 - 1950) of 27-29 Bromfield Street is one of Boston's oldest and most historic locations. The structure that the Book Store occupied, still called the Old Corner Book Store, was originally built in 1712 as an apothecary shop. In 1828 Carter & Hendee took over the space and reinvented it as a bookshop. Later it fell into the hands of publishers Ticknor and James Fields. On November 12, 1864, shortly after Ticknor died, Fields sold the Old Corner Bookstore to E. P. Dutton. Dutton ran the business until his own retirement in 1869, when Alexander Williams took over the space, running it as A. Williams Publishers, Booksellers and Importers until his own retirement in 1883. In the 1890s it served as a magazine store. Such important literary giants as Henry Wadsworth Longfellow, James Russell Lowell, Henry David Thoreau, Ralph Waldo Emerson, Nathaniel Hawthorne, and Harriet Beecher Stowe were known to frequent the establishment. Due to its many literary connections, this shop published some of the most important American books ever written, including The Scarlet Letter, Walden, and the Atlantic Monthly Magazine. The space remained open as a bookstore for nearly 100 years before closing c. 1950. For a time it was converted to a parking garage until acquired by Historic Boston, Inc., who preserved it. Today the Globe Bookstore, in Harvard Square is considered its successor. The Old Corner Book Store building has been fully restored as a historic monument and is currently occupied by a jewelry store. Learn More...

Prepared in this format by the Old Corner Book Store, 27-29 Bromfield Street, Boston.