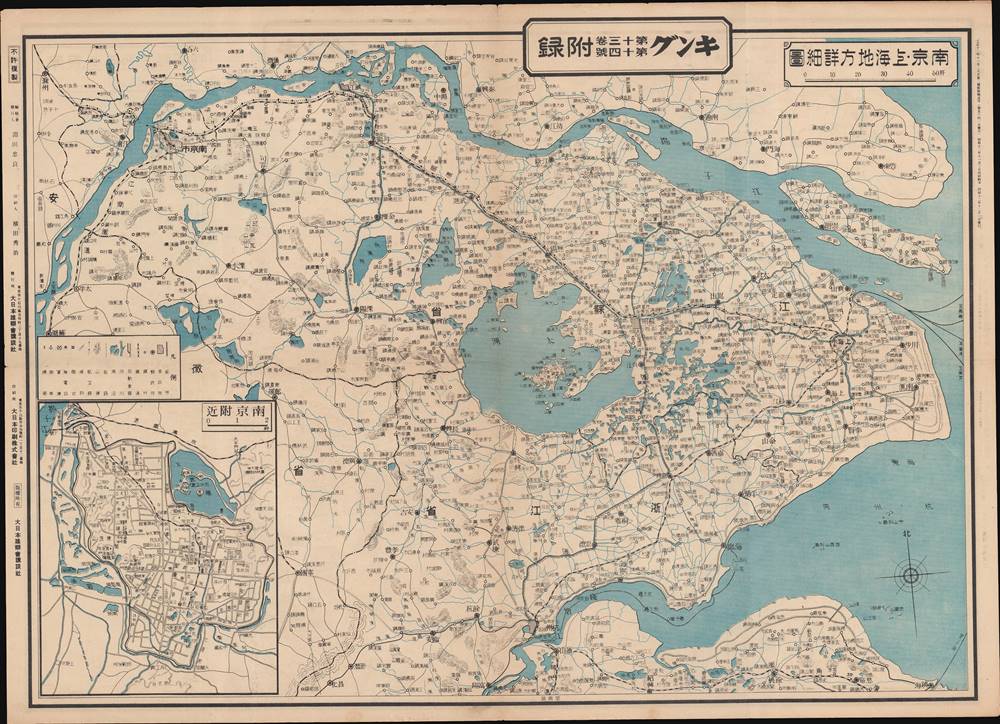 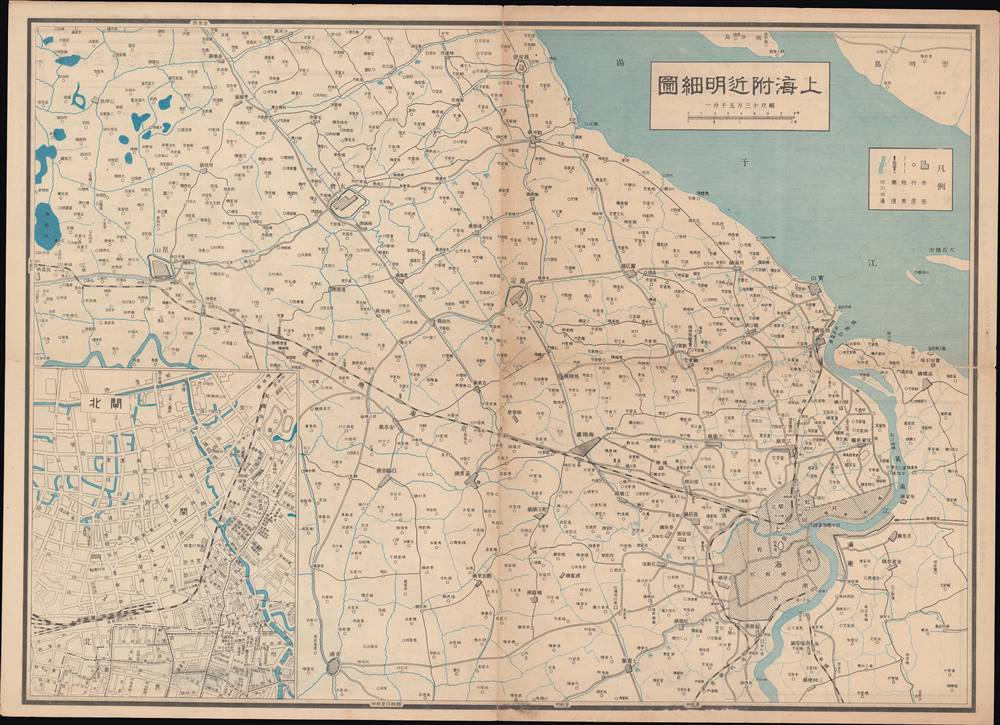 A map for the Japanese home front, marking the capture of Shanghai.
$250.00

This is a 1937 map of the Nanjing-Shanghai region in China, published in the Japanese magazine King at the height of the fighting in that area during the Second Sino-Japanese War. It served as a means of familiarizing the Japanese home front with the geography of the battlefield in China.

The front (recto) shows the heart of the Jiangnan (江南) region, including Nanjing at top-left and Shanghai at right-center, along with other cities, towns, and villages. Some of these villages were the site of major battles within the wider campaign, such as Dachang (大場鎮), just north of Shanghai. The Japanese captured the village after nearly a month of fighting, threatening to encircle Chinese forces in the region and leading to the Chinese retreat from Shanghai.

Geographic features such as the Yangzi River and Lake Tai are shown, along with mountains, dikes, wharves, military ports, and bridges. The all-important rail lines, the Huning Railway (滬寧鐵路) between Shanghai and Nanjing (known then as the Hujing Railway 滬京鐵路) and the Huhang Railway (滬杭鐵路) between Shanghai and Hangzhou, are displayed prominently. An inset map at bottom-left shows the city of Nanjing, with the imperial-era walls drawn as a bold black line around the city.

The verso is a similar map, focused more closely on the hinterland of Shanghai (shaded in grey at bottom-right) where much of the fighting was taking place. The Japanese were careful not to attack too closely to the areas of the foreign concessions inhabited by Americans, British, and other foreigners, lest they shift international opinion in China's favor (nonetheless, dozens of foreigners were killed in the fighting and international opinion did gradually turn against Japan). There was, however, intense urban warfare in Hongkou (虹口), the Japanese neighborhood of the International Settlement, and in nearby neighborhoods, especially Zhabei (閘北), shown in an inset map at bottom-left. Even individual buildings were the site of repeated battles, such as the Sihang Warehouse (四行倉庫), when Chinese defenders beat back wave after wave of Japanese attacks; their heroism helped to rally Chinese morale during the retreat from Shanghai and has been commemorated in two films, a 1976 Taiwanese production and a 2020 mainland Chinese blockbuster.

The Battles for Shanghai and Nanjing

Starting with the Japanese invasion of Manchuria (the 'Mukden Incident') in September 1931, Chinese and Japanese troops fought on-again, off-again battles in northern China for several years. One of these many skirmishes took place on July 7, 1937, at the 'Marco Polo Bridge' (Lugouqiao), just to the southwest of Beijing, which spiraled into a battle for Beijing itself, setting off the long-expected war. Chiang Kai-Shek decided to dedicate the bulk of his forces to a battle for Shanghai, which raged in the closing months of 1937. Chinese-administered parts of the city, particularly Zhabei and Wusong to the north and east of the International Settlement, saw extensive bombardment and house-to-house fighting.

Even the foreign concessions were not spared, most notoriously in the 'Black Saturday' incident, when a Chinese aircraft attempting to bomb a Japanese battleship on the Huangpu released its payload early, right into the most heavily-populated part of the International Settlement, killing some 3,000 civilians.

Despite the valiant efforts of Chinese troops, Japanese forces had naval, air, and artillery superiority and were able to receive sufficient resupply and reinforcements. They held their ground against Chinese attacks until a counter-attack was prepared, which threatened to encircle the Chinese forces. With his forces severely weakened and with many units in disarray, Chiang retreated from Shanghai and arranged a hasty defense of Nanjing while planning to rally his forces in Chongqing, deep in the Chinese interior.

Although the Japanese had won the battle, it had taken longer and come at a higher cost than anticipated, setting a tone for the entire war, where Japan was able to win battlefield victories but unable to crush the will of the Chinese to resist. Facing demoralized and disorganized Chinese troops, the Japanese were able to take Nanjing in less than two weeks in early December 1937. In the course of the battle and soon afterwards, Chinese troops and civilians alike were shown no mercy, and it was assumed that Chinese men of fighting age were deserting Chinese soldiers or partisans. In the weeks after main combat operations ended, Japanese troops massacred tens of thousands of Chinese prisoners of war and civilians and raped thousands of women in one of the most notorious war crimes of the Second World War. Xiaguan (下關), along the Yangzi River at top-left of the inset map, was the site of some of the largest massacres. In the months that followed, a collaborationist Reform Government was established, and Japanese propagandists poured into Nanjing to tell the home front about the great victory there.

This map was printed on November 3, 1937 (Showa 12) and published on December 1, just as the battle was moving from Shanghai to Nanjing, as an addendum to King, Vol. 13, No. 14. It is only known to be held by the National Museum of Japanese History and it is scarce to the market.