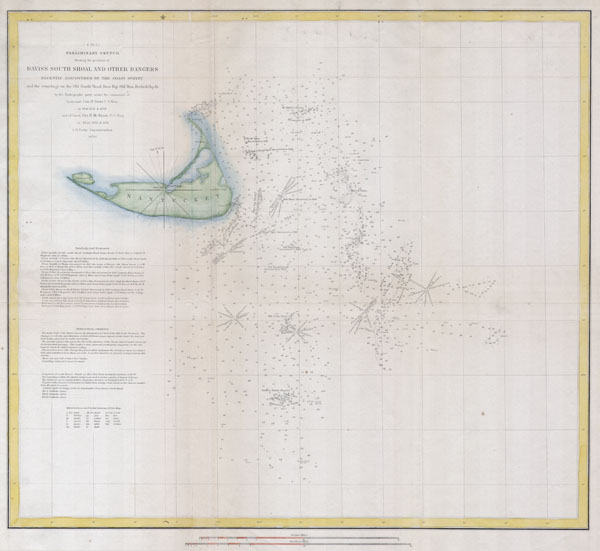 This beautiful and important sea chart or map depicts the waters immediately surrounding the island of Nantucket, Massachusetts, including Davis' Shoal, Old South Shoal, and others. Chart contains a wealth of practical information for the mariner from oceanic depths, to harbors and navigation tips on navigating the tidal currents. This map was created under the direction of A. D. Bache, Superintendent of the Survey of the Coast of the United States and one of the most influential American cartographers of the 19th century. The hydrography for this map was accomplished by a party under the command of Cha. H. Davis in 1846-48 and Cha. H. Mc. Blair in 1849-51. Bache himself discussed the difficult of accurately mapping the regions south and west of Nantucket in his 1852 Congressional Report:

'The most difficult piece of hydrography on our coast has been completed during the past season. The area of broken ground east and south of the island of Nantucket is nearly seven hundred miles in extent, and is spread with dangers, some real and some only apparent. The work which has been prosecuted there perseveringly for some seasons has made the position of the dangers fully known, and has in turn employed the resources and taxed the perseverance of some of the most able hydrographers of the survey. It was commenced in 1846 by Lieut. C. H. Davis, U.S.N., has been continued since 1849 by Lieut. C. H. McBlair, and has this year been completed by Lieut. H. S. Stellwagen. The breaking of the water over these sunken shoals and banks ... which, under the name of 'Rips,' occurs extensively over this region, serves, no doubt, to increase the terrors of the spot, though indicating in reality a change of depth, and not absolute shoalness. The outliers of this ground, Fishing Rip and Davis's Bank, have twenty-five and a half feet upon them, while on Great Rip, the Rose and Crown, Old South, and Davis's shoal, there are, respectively, but four, seven, six, and eight feet. The arrangement of these shoals led us to suppose that there must be dangers south of Davis's shoal, and several attempts have been made to look them up. The explorations of Lieutenant Commanding Stellwagen this year have completed the search over the space south of Davis's shoal to deep water, without any indication of another tier of banks. The hydrography of such ground as this is truly difficult; it must be surveyed with the minuteness of a harbor, without the facilities which neighboring land affords. The land cannot be seen from the deck of a vessel from Davis's shoal, and yet it must be traversed closely with the sounding line, and the position of the soundings be closely determined. It is necessary to establish bases from those on land by floating objects, which, like vessels, can be seen at a sufficient distance, and to preserve temporarily the positions of these floating stations by buoys. The first severe storm not only stops the actual sounding work, but is apt to break up the system entirely by removing or changing the position of these marks. The weather fit for surveying on that peculiarly stormy part of the coast is but a small fragment of each summer, and the harbors which must necessarily be sought as a refuge on the coming up of storms, which cannot be weathered in such exposed situations, are distant. It is no small source of congratulation that this difficult work is well through with, and without accident to those who have so faithfully encountered the very dangers which they seek in order to instruct others how to avoid them....'

Bache, A. D. 1852. A report of the superintendent of the Coast Survey... 1852; Phillips, Philip Lee. A List of Maps of America in the Library of Congress, p.259.
Looking for a high-resolution scan of this?