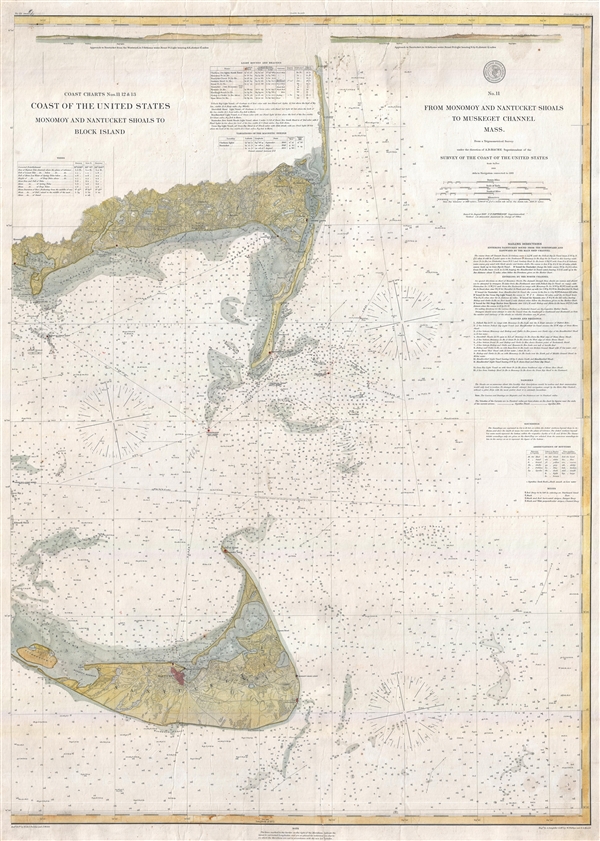 An uncommon 1883 U.S. Coast and Geodetic Survey nautical chart or maritime map of Nantucket, Massachusetts. The map covers from Hyannis to Chatham Port and south to include most of Nantucket island to Old Man's Shoal. Only the western most part of the island is trimmed off. The map is primarily coastal, but offers incredible detail throughout with topography extending several miles inland. Nantucket has full topography. There are countless depth soundings throughout with lighthouses, bells, and light boats highlighted. In addition to cartographic detail, the map also offers a wealth of practical information for the mariner: sailing instructions, tidal notes, information on light houses and beacons, etc. This chart was first issued under A. D. Bache in 1866, with the present example being updated under C. P. Patterson to 1883. Unlike many Coast Survey charts, the present map is an independent issue and a working maritime chart.

Good. Some soiling. Used nautical chart. Repaired closed tear extending about 4 inches from lower margin.
Looking for a high-resolution scan of this?