1890 U. S. Geological Survey Chart or Map of Nantucket, Massachusetts (Set of 2 Maps) 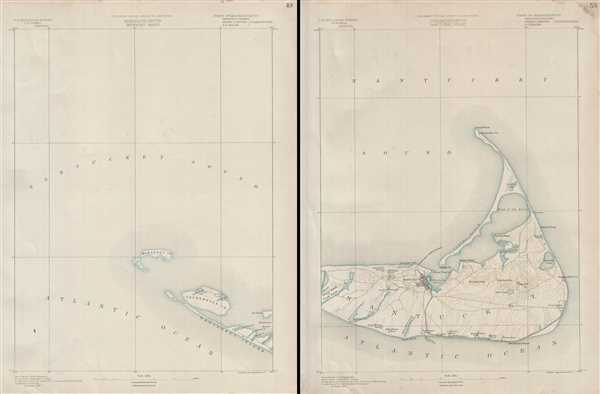 1890 U. S. Geological Survey Chart or Map of Nantucket, Massachusetts (Set of 2 Maps)

This is a set of two 1890 topographical maps produced by the U.S. Geological Survey. The left sheet depicts the Muskeget Channel. Extends eastward from Martha's Vineyard to include Muskeget Island, Tuckernuck Island, and the eastern parts of Nantucket.

The maps offer copious topographical detail as well as some submarine detail as well as towns, roads, and some individual buildings. Prepared by Henry Gannett, Marcus Baker, and E. B. Clark. These are two of the most sought after topographical maps produced by the U.S. Geological Survey. Both charts are drawn from survey work completed by the U.S. Geological Survey in 1887.