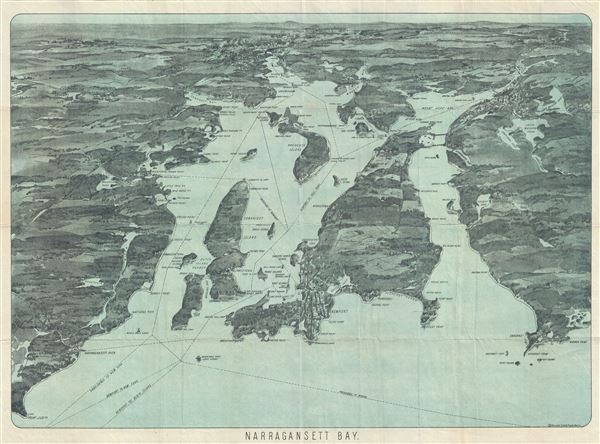 This is an attractive and uncommon c. 1900 bird's eye view map of Narragansett Bay, Rhode Island, by the Boston map publisher George H. Walker. The view covers the entirety of Narragansett Bay from Point Judith to Providence, and extending eastwards as far as Warren Point and Sakonnet. The map presents the region from a bird's eye perspective facing north. It identifies Newport, Conanicut Island, Prudence Island, Rhode Island, and various settlements along the bay's extensive shoreline. Trail routs are also rendered. Walker is better known for his similar view maps of Boston Harbor - the present example is thus somewhat out of his focus area and very scarce.

Very good. Minor creasing along original fold lines. Professionally flattened and backed with archival tissue. Accompanied by original binder.
Looking for a high-resolution scan of this?