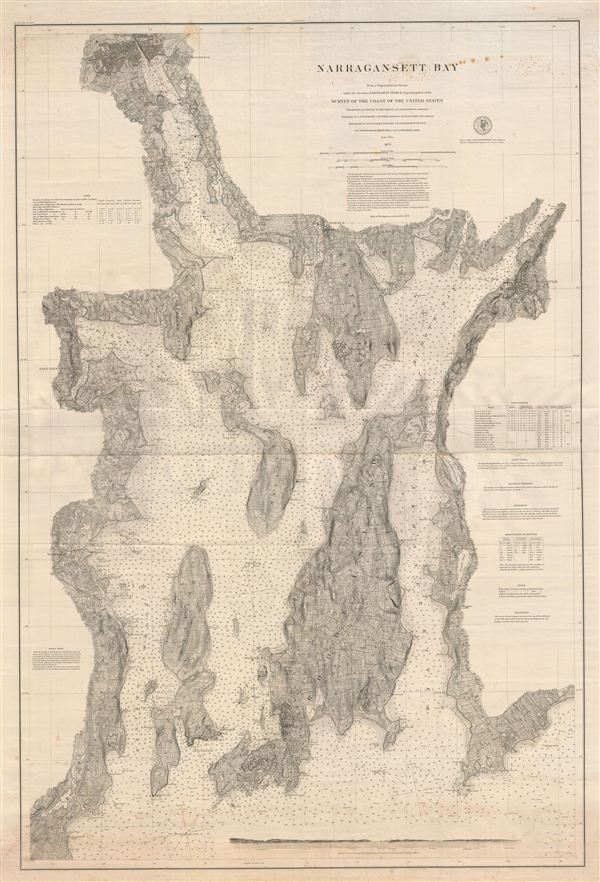 A scarce 1873 nautical chart of Narragansett Bay, Rhode Island, issued by the U.S. Coast Survey. Printed on two sheets which have been joined at the center, this fine working nautical chart covers the entirety of Narragansett Bay from Providence Rhode Island to the Pettaquamscutt River and from east Greenwich and Apponaug to Fall River, inclusive of Newport, Warren, Rhode Island (the island), Bristol, Connecticut Island, and Prudence Island. The whole features countless depth soundings in feet as well as a wealth of practical information for the mariner, including notes on light houses, soundings, magnetic variation, light vessels, elevations, and tides. A land profile view at the base of the map focuses on the 'Approaches to Narragansett Bay, Beavertail Light bearing N. by e. ½ e. distant 3 Mile.'

Work on this chart began in the 1860s under A. D. Bache and was subsequently continued under Benjamin Pierce, the present example being the highest expression of the Coast Survey's 19th century work in this region. The triangulation for this chart was completed by e. Blunt, S. C. McCorkle, and A. M. Harrison. The topography is the work of A. M Harrison, C. Hosmer, and H. G. Ogden. The hydrography was accomplished by G. S. Blake, J. R. Goldsborough, W. P. Trowbridge, H. Mitchell, and F. P. Webber. The scale is 1:40000. This map is an independent issue chart on thick stock and represents Coast Survey Chart no. 353.

Very good. Minor foxing here and there. Some additional toning along the bottom of the map.
Looking for a high-resolution scan of this?