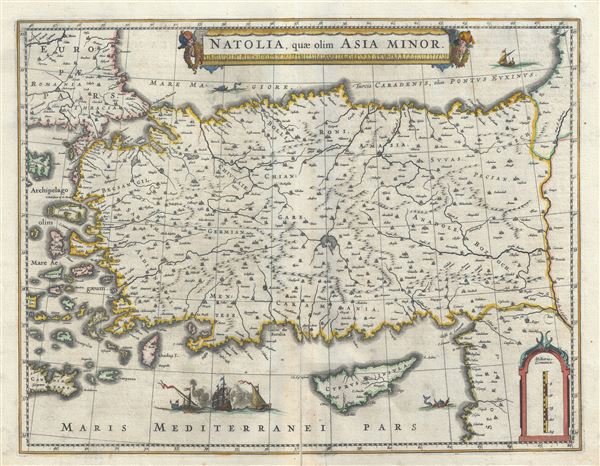 This is an attractive c. 1640 map of Turkey or Asia Minor by Johannes Blaeu. It covers Turkey from the Aegean Sea east as far as the Euphrates River. Cyprus and some of the Aegean Islands are also included. The map is beautifully detailed, noting several important towns, cities, rivers, and topography. Mountains are beautifully rendered in profile. The important cities of Constantinople (Istanbul), Smyrna (Izmir) and Antioch are identified.

The Ottoman Empire, at its peak, controlled the entire region during this period with Constantinople as its capital. In the middle part of the 17th century, after its period of growth, the Ottoman Empire would enter a period of gradual decline and stagnation.

A beautifully illustrated sea battle in the Mediterranean depicts one of the many naval battles fought by the Ottomans. Another illustration of a sea monster is also featured in the bottom right quadrant. A beautifully engraved title banner adorns the top of the map, with a scale depicted in the bottom right quadrant. Later editions would include an illustration of a turbaned figure holding the scale. This map was issued in 1840 in Johannes Blaeu's Atlas Novus.

Very good. Some centerfold damage with verso reinforcements. Original platemark visible. Minor toning and spotting.
Looking for a high-resolution scan of this?