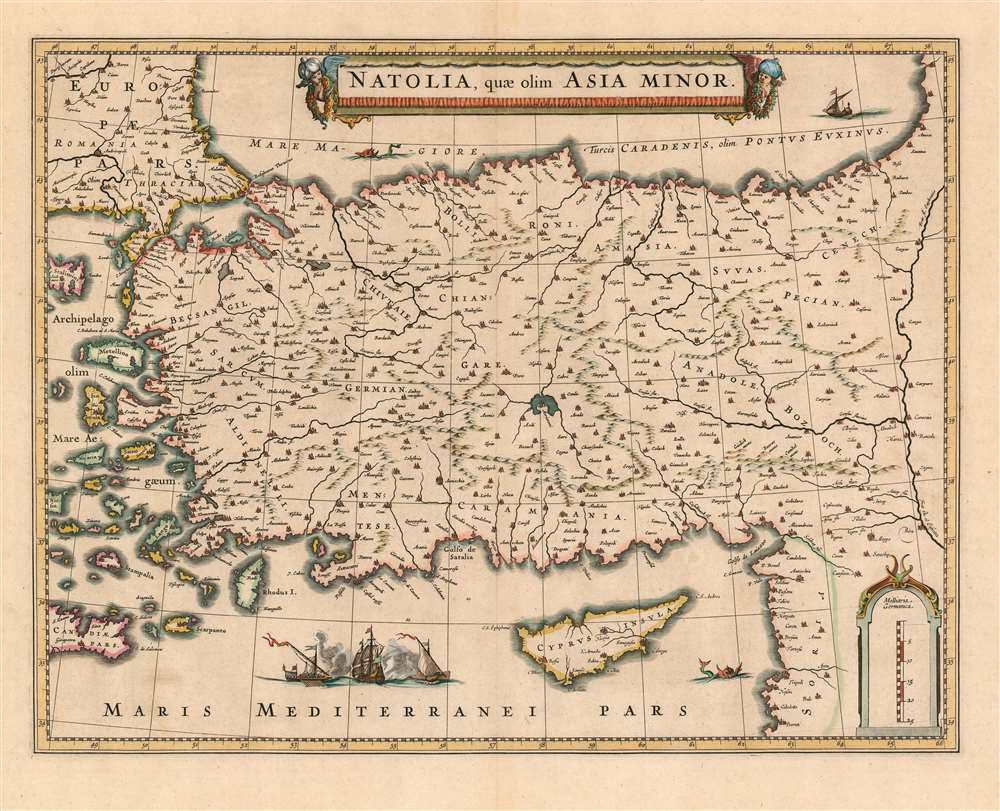 A Likely Appendix Issue of a Richly Decorative Dutch Map of Asia Minor and Cyprus
$750.00

This 1636 map of Asia Minor and Cyprus was engraved by Jansson in 1636 for inclusion in his business partner Henry Hondius's atlases. This example, lacking verso text and exhibiting a bold, sharp strike, was probably an early appendix issue intended for distribution to previous subscribers to Hondius' atlas. The map depicts the region from the Aegean Sea to the Euphrates River, and from the Black Sea to Cyprus and the Mediterranean Sea. The beautifully engraved map is embellished with an evocative cartouche flanked by two turbaned putti. West of Cyprus, two Ottoman triremes blast away at a square-rigged ship, alluding to the long contention between Turkish and Christian European powers over the region. Hondius and Jansson produced this map quite shortly after fellow Amsterdam mapmaker Blaeu produced a virtually identical map in 1634. Despite the heated competition evident between the two mapmaking giants, the map's geographical data was not strictly fresh - the 16th century cartographic giant, Gastaldi, remained authoritative with respect to this region.

This map was executed for inclusion in Henry Hondius' Atlas, appearing first in a 1636 German edition and remaining in various language editions published by both Hondius and Jansson into the 1680s. Despite its long history in print, we only see three examples of the separate map in institutional collections. Examples of various editions appear on the market from time to time. The absence of verso text on the present example suggests that this was an Appendix issue of the map, provided to owners of previous editions of the Hondius atlas to be tipped in, or to be added to a composite atlas. The sharp, even strike and the palette of the original hand color supports an early date for this example.

Henricus Hondius II (1597 – August 16, 1651) was a Dutch engraver, cartographer and publisher. The son of the cartographer Jodocus Hondius, Henricus took over the business after father died in 1612, co-ran the business with his brother Jodocus II. In 1628 Henricus partnered with Jan Janssonius and together they continued the business, with Jansson’s name appearing on the Atlasas co-publisher after 1633. Eventually, about 50 editions of the Atlas were released in the main European languages. In the Islamic world, the atlas was partially translated by the Turkish scholar Katip Çelebi. The series is sometimes called the 'Mercator/Hondius/Jansson' series because of Jansson's later contributions. Learn More...

Very good condition. Reinforced at one corner, else excellent with wide margins and original hand color.