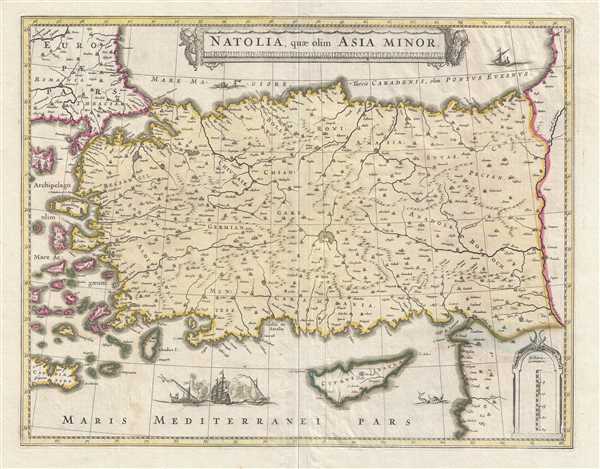 This is an attractive c. 1708 map of Turkey or Asia Minor. Issued by Petrus Schenk and Gerard Valk, it was engraved in 1636 by Henry Hondius, based on the 1634 map by Johannes Blaeu. The map depicts the region from the Aegean Sea and some of the Aegean Islands to the Euphrates River and from the Black Sea to Cyprus and the Mediterranean Sea. Beautifully detailed, several important towns, cities, rivers, and regional topography are noted. Mountains are beautifully rendered in profile. The important cities of Constantinople (Istanbul), Smyrna (Izmir), and Antioch are identified.

The Ottoman Empire, at its peak, controlled the entire region during this period, with Constantinople as its capital. In the middle part of the 17th century, after its period of growth, the Ottoman Empire would enter a period of gradual decline and stagnation.

This map was issued by Petrus Schenk and Gerard Valk c. 1708.