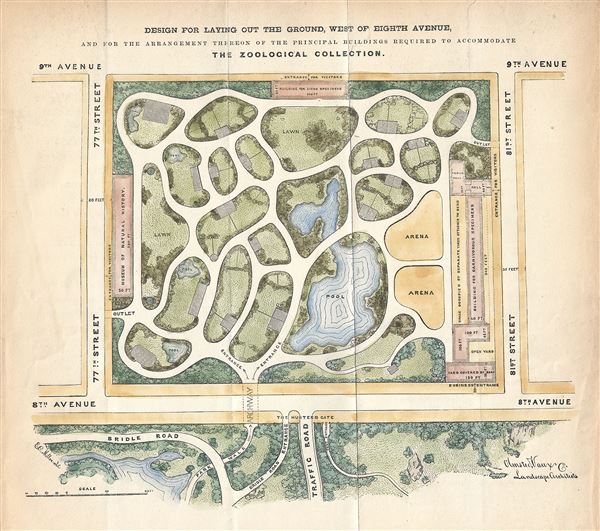 This is an extraordinary 1867 hand colored map or plan of the grounds that today house the American Museum of Natural History in New York City. It depicts from 77th Street north to the intersection of 81st Street and 8th Avenue (Central Park West), including part of Central Park, and shows the ground layout of Manhattan Square, and the arrangement of the principal buildings of the zoological collection.

Manhattan Square, part of the Central Park's land since 1864, was originally planned to be home to the zoo. Prior to the construction of the present site which houses the American Museum of Natural history, the museum's collections were housed in the Central Park Arsenal, on the eastern side of Central Park. The collections quickly outgrew the Arsenal and secured Manhattan Square for a bigger complex. In spite of fund being limited to allow a relatively modest building to house the collection, architects Calvert Vaux and J. Wrey Mould prepared a colossal plan covering the Manhattan Square site in its entirety, from Central Park West (8th Avenue) to Columbus Avenue (9th Avenue) and from 77th Street to 81st Street. Their plan would also house the largest museum in the world. The museum today covers only half the site.

This map was prepared and printed for inclusion in the 1867 Tenth Annual Report of the Board of Commissioners of the Central Park.