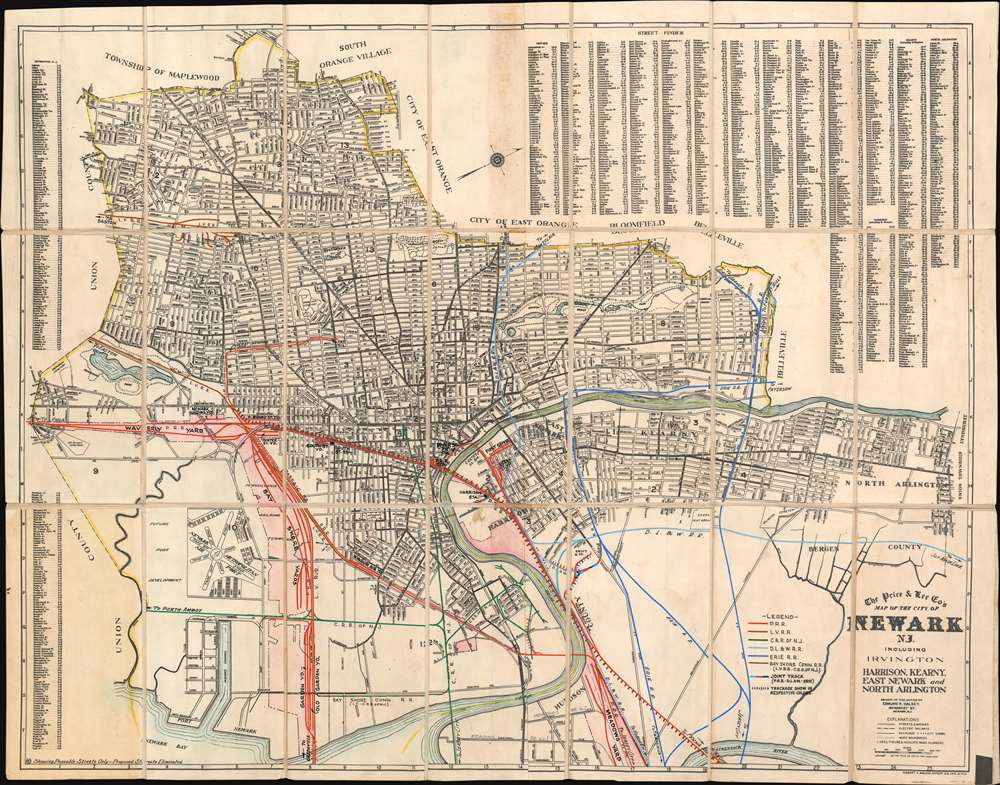 A one-of-a-kind map of Newark, New Jersey tracing railroad lines in and around the city.
$650.00

This is a 1940 Price and Lee Company city plan or map of Newark, New Jersey featuring manuscript railroad lines. Streets throughout the city are labeled, along with parks, cemeteries, and city wards. The Passaic River separates Newark from East Newark, Kearny, and North Arlington. An area of the map, which greatly resembles an inset, details Newark Metropolitan Airport, which today is known as Newark Liberty International Airport. A street index is situated in the upper right corner and continues for the town of Irvington, New Jersey, along the left border.

Manuscript notations present on the map use seven different colors to denote different railroad lines, and other railroad property, in and around Newark. A legend, situated in the lower right quadrant near the map's title, identifies which colors illustrate the trackage owned by each railroad, some of which is owned jointly by two or more railroads. The lines of the Pennsylvania Railroad (P.R.R.) are marked in red, as are several of their railyards, including Waverly Yards, Bay Shore Yards, and Meadows Yard. The Pennsylvania Railroad Station, located in downtown Newark near the Passaic River, is also marked in red, while all other stations are labeled in black. Other railroad lines illustrated here include the Lehigh Valley Railroad, the Central Railroad of New Jersey, the Delaware, Lackawanna and Western Railroad, the Erie Railroad, and the Bayshore Connecting Railroad. The Bayshore Connecting Railroad, which was jointly owned by the Lehigh Valley Railroad and the Central Railroad of New Jersey, was built in 1906 at the Newark Transfer of the Newark and New York Railroad to connect with the Lehigh Valley Railroad. A small section of jointly owned track in Bergen County is marked by the colors representing the Pennsylvania Railroad, the Delaware, Lackawanna and Western Railroad, and the Erie Railroad.

This map was created and published by the Price and Lee Company and New Haven and printed by the Robert A Welcke Offset Company of New York City in 1940. This map has been repurposed by the Pennsylvania Railroad to illustrate the rail lines in and around Newark. Due to the map's unique construction and the presence of the manuscript rail lines this map is truly one-of-a-kind.

Price and Lee Company (1873 - c.1977) was a publishing firm founded in in New Haven, Connecticut, in 1973. Among the items published by Price and Lee were directories of New Haven and later maps of American cities. Learn More...


Robert A. Welcke (fl. 1876 – c. 1940) was a photolithographer active in New York in the latter part of the 19th century and early 20th century. Welcke may have been a Prussian immigrant, but we have not been able to verify this. Welcke's firm, Robert A. Welcke Offset Company, was based at 176 William Street. Welcke's corpus of work ranges from maps of New York and Connecticut to illustrations on Flemish Renaissance interiors to government maps and brochures to decorative sheet music covers. Following Welcke's death the firm was taken over by his daughter, Olga Welcke, who along side William Jugens managed the firm until the outbreak of World War II. Learn More...

Good. Dissected and mounted on linen in 21 panels. Light wear along oringial fold lines. Exhibits soiling. Appears to have been constructed out of two sheets. Blank on verso.
Looking for a high-resolution scan of this?