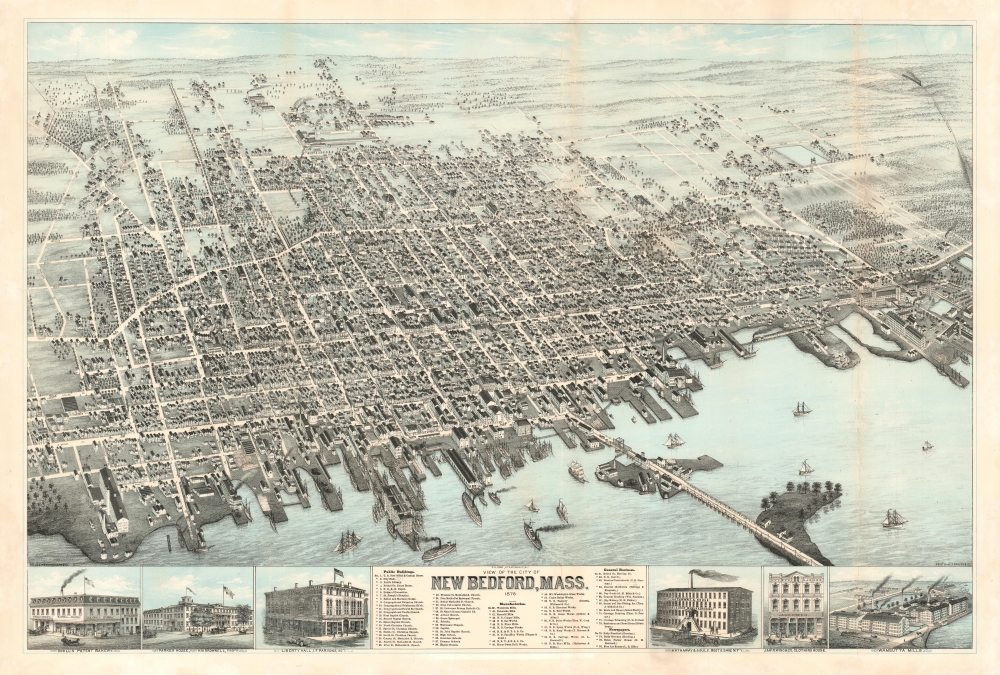 New Bedford's Transformation from a Whaling Town to a Mill City
$2,750.00

This is the 1876 first state of Oakley Hoopes Bailey bird's-eye view of New Bedford, Massachusetts. When New Bedford officially became a city in 1847, it was one of New England's most productive whaling cities, challenging Nantucket and Providence. Whaling dominated the city's economy for most of the century, and that trade fueled the city's initial population boom until around 1860; in 1857, New Bedford was the richest city per capita in the world – but the discovery of petroleum in Pennsylvania would cause an inexorable decline in the market for whale oil, and the predations of secessionist commerce raiders during the American Civil War would speed the decline of an already-fading industry. By the time this view was produced in 1876, New Bedford was not so much a whaling town as it was a mill town: the textile industry had taken over. In 1875, the Wamsutta mills on their own processed enough cotton into cloth to make more money than that year's entire whaling catch. The textile mills fueled even greater prosperity than whaling, spurring the development of industries to serve the city's rich.

The view identifies seventy-six public buildings, manufactories, general businesses, and newspapers in a list at its foot, and these reflect the nature of the city: among its public buildings are no fewer than twenty six churches, indicative of prosperity; among the city's 'Manufactories' are the mammoth Wamsutta, Potomska and Gosnold Textile Mills, which dominate the waterfront. Gas works, copper mills, and cordage works can be seen, but many of the factories are tool and machine works, necessary support for the city's mills. Soap, spice, shoe, and carriage works figure prominently, serving the needs of the mill owners and others. Six vignettes under the view include a patent bakery, a soap manufactory, a shipping agent, a boot and shoe company, the J and W.R. Wing and Co. clothing house, and Wamsutta Mills.

By the time this view was drawn, Bailey had resettled from Ohio to Cambridge, Massachusetts, and so this piece is among his later work that focused on towns near his new home. The lithograph was nevertheless executed by the firm of C.H. Vogt in Milwaukee, with whom Bailey appears to have had a relationship, and with whom he would continue to work until 1878; concurrently, Bailey seems to have had his view printed by the Milwaukee firm of Jacob Knauber, a relationship which seems to have ended in 1878 or 79. After that point, Bailey's work was either printed in-house, or by the Boston firm of J. C. Hazen: by then, clearly, Mr. Bailey had fully settled in New England.

This view is rare. We see only five examples catalogued in OCLC; this first state appears in the collections of the American Antiquarian Society Library, Boston Public Library, Harvard University, and the State University of Massachusetts. A second state, with the additional text 'Presented by J. and W. R. Wing and Co., 111 Union Street,' is in the Library of Congress. The present example is of the first state.


Jacob Knauber (1846 – 1905) was a German-American lithographer based in Milwaukee, Wisconsin. Knauber was born in Heidelberg, Germany and emigrated to America as a young man. He apprenticed as a lithographer in St. Louis from 1861. In 1867 he foundered J. Knauber Lithographing Company, which he would eventually run with his three sons, Arthur, Walter, and Richard. The firm specialized in American city views, billheads, letterheads, receipts, and checks. Knauber managed the firm it until his death in 1905. Afterwards it was run by his children until 1946 when it was acquired by Columbia Art Works. Learn More...