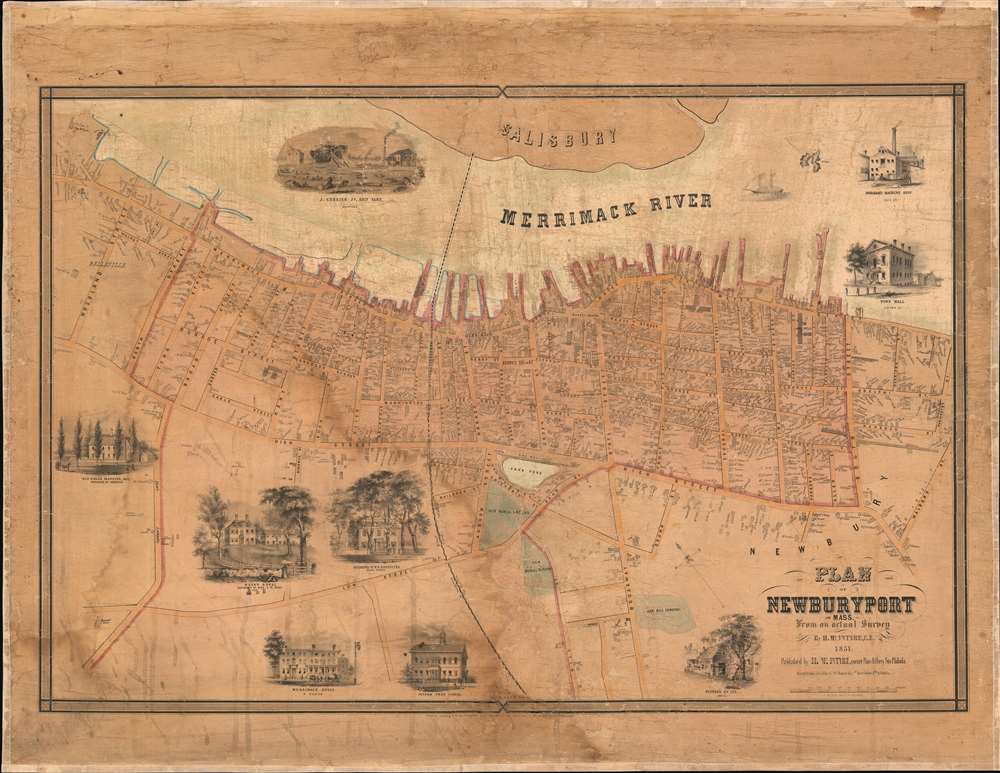 A rare and beautiful 1851 map of Newburyport, Massachusetts produced by surveyor Henry McIntyre. The plan is oriented to the northeast, framing the town with the Merrimack River along the top of the engraving. The bulk of the town falls between the river and High Street, extending for the most part from Woodland Street down to Marlboro Street (named Malboro on the map) Scattered houses and cemeteries situated along Low Street and beyond. The bridge now crossing the Merrimack via Route 1 was in 1851 a railroad bridge: the Georgetown Rail Road and the Eastern Railroad appeared to share the track, and there are two depots marked on this plan.

The detail of the plan is incredibly granular, being executed at a scale of 250 feet to the inch. Consequently, the layout of individual houses can be discerned - many of which are are still in use today. Virtually every structure is labeled, either with its purpose (School Houses, Court houses and so on) or its owner. This extends to the maritime industries of Newburyport: dozens of wharves, four mills, and several rope factories - one of which appears to have been nearly nine hundred feet long.

The plan is decorated with nine views, mostly of particularly fine buildings owned by prominent citizens. A bustling scene of loading and unloading carriages attends a view of the Merrimack House hotel, and the Putnam Free School features children playing on the grounds. Most prominent are the Town Hall and marks of the town's industriousness: George's Smithy, Ingraham's Machine Shop, and Currier's Shipyard (also appearing at the northwestern extent of the plan) showing a great ship under construction.

All McIntyre maps are scarce on the market; few were produced and those that survive only appear in a handful of institutional collection. His maps, like comparable maps by Francis Walling, were issued by subscription, so only small runs were produced. We are aware of examples at The Leventhal Map Center at Boston Public Library, the American Antiquarian Society, the State Library of Massachusetts and the British Library. No examples appear in auction or catalogue records.

Henry McIntyre (fl. 1850s) was an American publisher of maps between 1850 and 1852. His surviving output focused exclusively on large city plans of New England towns - Boston, Lynn, Salem, Danvers, Newburyport and Norwich, Connecticut - in spite of many of his works being actually printed in Philadelphia. It would appear that, like many more successful map and atlas publishers, McIntyre produced a handful of large, impressive maps either on a subscription model or as a speculative venture. The extremely short period of time during which McIntyre’s maps were produced suggests that his efforts were insufficiently fruitful. We find no trade advertisements for McIntyre’s map ventures in the newspaper record, and indeed, we find no biographical information for him whatsoever. (Perhaps had he been more assiduous at placing advertisements, this would not have been the case.) Learn More...


Jacob Aub (c. 1821 - May 7, 1885) was a German-born Jewish American lithographer. He arrived in the United States prior to 1847, at which point his lithographic output begins to appear. He became an American citizen in 1851, and partnered with his citizenship sponsor Norman Friend to form the lithographic firm of Friend and Aub. During the Civil War he In 1861, Aub joined the Union Army, serving as quartermaster, but his military career does not seem to have spanned the entire war: in 1863 he left both lithograph and the military to join the silk manufacturing firm of Aub, Hackenburg & Company. Learn More...


Norman Friend (1814-1888) was a Danish - American lithographer and engraver, specializing in map work. He worked in Philadelphia throughout the second half of the 19th century, having immigrated to the United States in the early 1840s. He began his naturalization in and around 1844. He was certainly a citizen by 1851, at which point he served as the citizenship sponsor to Jacob Aub, with whom he partnered in the firm of Friend and Aub. After Aub's departure to the military in 1861, Friend continued to operate at the address under his own name until his death. Friend and Aub executed maps for many publishers, including Walling, McIntyre, Bridgens, and Otley. Learn More...

Good condition. Map has been stabilized and mounted on new linen. Some areas of surface restoration with some reinstatement of image.