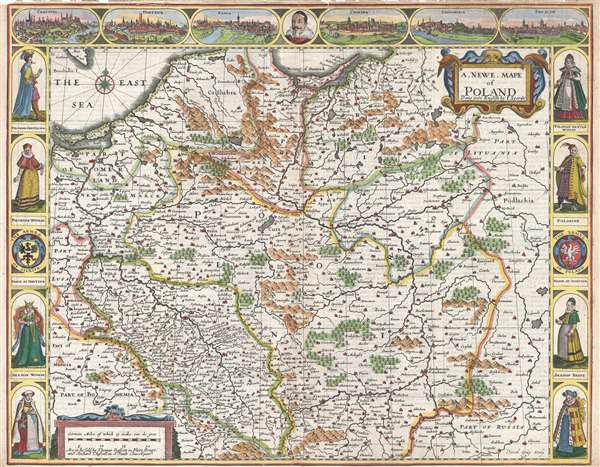 Beautifully colored map of Poland - with views of Krakow and Breslau!

This is a 1676 John Speed carte-a-figure map of Poland issued at the end of the Second Polish-Ottoman War. The map depicts from the Baltic Sea and eastern Bohemia to Prussia, Lithuania, and western Russia and from the Baltic to Kraków (Cracow; Cracovia). Beautifully colored, the region is depicted in detail. Different countries and districts are illustrated and labeled, including Poland, Russia, Prussia, Lithuania, Bohemia, Silesia, and Warzovia (Warsaw). Major cities, such as Warsaw (Warzovia), Kraków (Cracovia), Wrocław (Breslau), and Sandomierz (Sandomiria), along with numerous other towns and villages. Views of Kraków (Cracovia), Gdańsk (Dantzick; Danzig), Poznań (Posna), Krosno Odrzańskie (Crossen), Sandomierz (Sandomiria), and Wrocław (Breslaw; Breslau) are situated along the top border, with a portrait of an unlabeled figure at center. Along the left and right borders, portraits of generalized Polish and Silesian citizens are illustrated. The seals of the armies of Silesia and Poland are also depicted.

This map was produced by John Speed and published by Thomas Bassett and Richard Chiswell in 1676.

Speed, J. The Theatre of the Empire of Great Britaine. Presenting an Exact Geography of the Kingdomes of England, Scotland, and Ireland and the Isles adjoyning with the Shires Hundreds Citys and the Shire townes within the Kingdome of England devided and described. As asl A Prospect of the most famous Parts of the World. (London: Bassett and Chiswell) 1676.