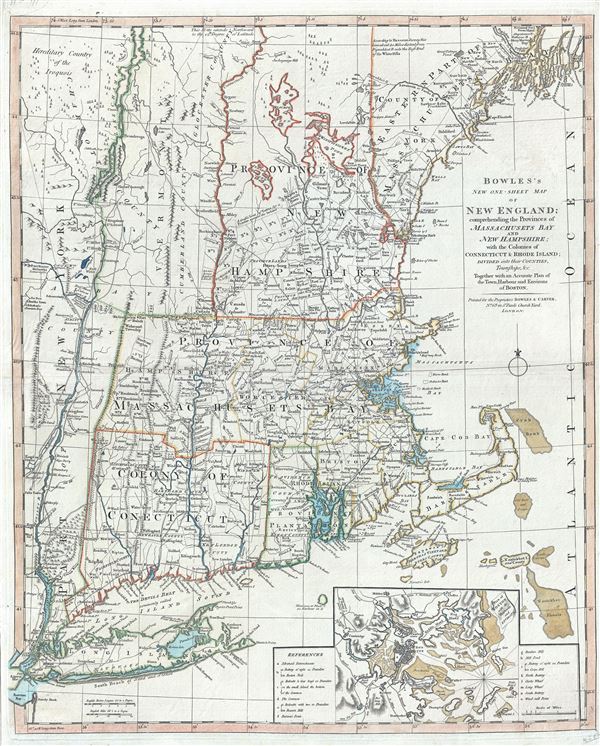 A rare and important Post-Revolutionary War Era map of New England. One of the first maps to recognize Vermont as a state.

A rare separately published c. 1796 map of New England by Bowles and Carver. Centered on Massachusetts, this map covers the New England coastline from Long Island, New York, to Little Kennebec Bay, Maine, and from Cape Cod and Nantucket westward to just beyond the Hudson River. This map was initially issued by Carrington Bowles in 1765 as a reduced and updated improvement upon the 1755 John Green / Braddock Mead map of the same region. The map transitioned through six known states, the present example representing the last and final iteration offering a number of cartographic firsts and significant important updates.

Bowles and Carver's map contains a wealth of updates, particularly in the northern quadrants, and can thus be considered only loosely connected to its 1755 parent map. Although it is unclear what Bowles's sources for these updates were, they are many and significant, including new roads, advanced geographical information, updated towns and counties, and revised border configurations. Perhaps the most significant of these is the presentation of Vermont as a state - making this one of earliest maps to do so. Vermont was incorporated as a state in 1791, so this map is an exceptionally early documentation of it thus, evident in only the last two states of the map. Vermont's 'state' status is clearly supported in an annotation along the northern border of the map which starts with 'This State…' Bowles further more expands the Vermont border westward at the expense of New York as far as the Hudson River. Similarly New Hampshire is significantly updated with New Towns, roads, and a more sophisticated presentation of the state's several great lakes.

In New York, just north of Albany, there is a note identifying the Seat of Sir William Johnson, an Anglo-Irish Baronet who moved to New York to manage an estate in the midst of Mohawk territories. Johnson mastered the Mohawk language as well as Iroquois customs and served as a liaison between the British Crown and the American Indian nations. Johnson died shortly before the outbreak of the American Revolutionary War. Additional fortifications and settlements are noted all along the Hudson River.

The large inset in the lower right hand quadrant includes a fine detail map of Boston and its environs. The detail plan was added in the 1776 edition of the map to illustrate events associated with the outbreak of the American Revolutionary War. It was continued without updates or revisions in all later editions of the map, including our present example. Centered on Boston proper, the inset details from Malden to Dorchester and from Cambridge to Boston Bay. Roads, topography, important buildings, and military installations are noted and referenced via alphanumeric tables to either side of the inset. First published in 1765, this map exists in six states: