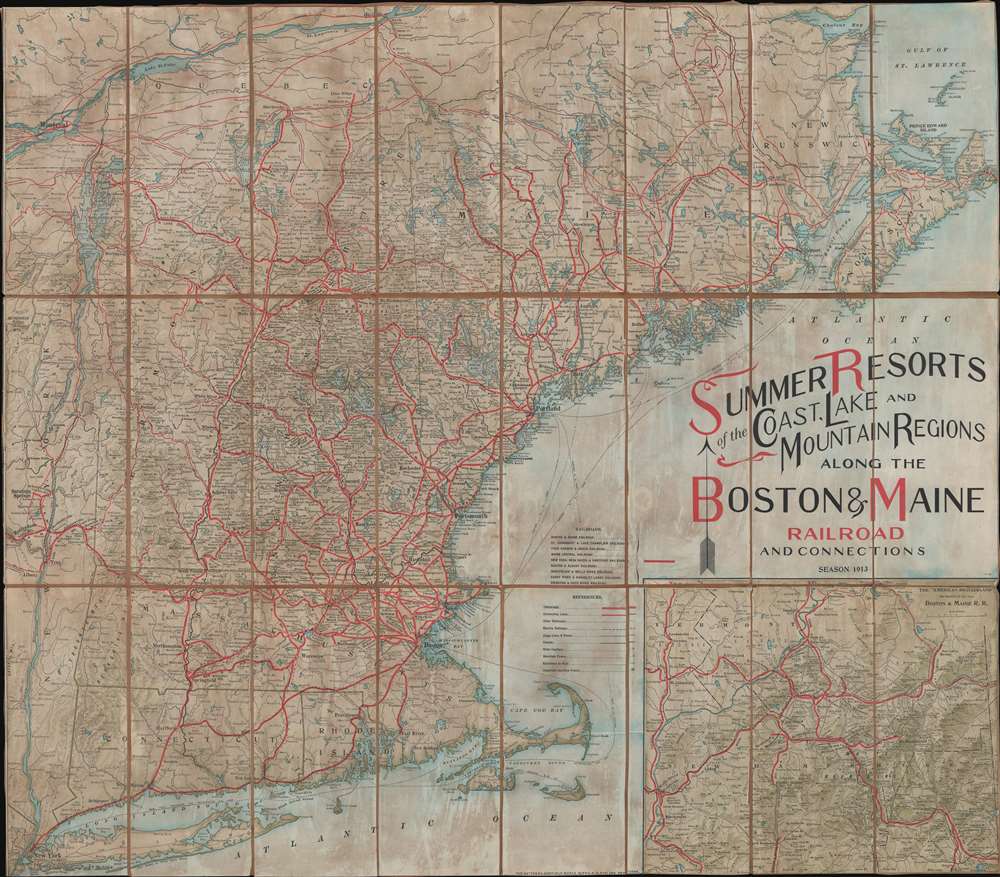 This is a decorative 1913 Matthews-Northrup map of New England. The map depicts from New York City northwards along the Atlantic coast as far as New Brunswick and the Gulf of Saint Lawrence and from the Hudson River Valley to the Atlantic Seaboard. Thick red lines highlight the Boston and Maine Railroad. This network includes not only the Boston and Maine Railroad, but also the Maine Central Railroad, the New York, New Haven, and Hartford Railroad, and the Boston and Albany Railroad, along with several others. Thinner red lines trace routes of connecting railroads, while other railroads, electric railways, stage lines, and canals, are illustrated by various notations. An inset map on the lower right highlights 'American Switzerland' the White Mountains of New Hampshire.

Commonly known as the 'B and M', the Boston and Maine Railroad was chartered in New Hampshire on June 27, 1835. The firm consolidated several smaller companies, including the Andover and Haverhill Railroad and later the Boston and Portland Railroad. It merged with the Maine, New Hampshire and Massachusetts Railroad in 1842, but retained the Boston and Maine operating name. In the subsequent decades it acquired or leased several other railroads, including the Boston and Lowell (1887), Northern (1884), Connecticut River (1893), Concord and Montreal (1887), and Fitchburg (1900). In 1910 it was acquired by J. P. Morgan and his New York, New Haven and Hartford Railroad. The firm initially prospered on the development of mill towns throughout New England and later capitalized on tourism from urban centers in Boston and New York. Nonetheless, the railroad went through a decline during the Great Depression, when most of the old textile mills closed. Part of the Boston and Maine network remains in operation today under the Pan Am Railways (PAS) brand.

This map was created by Matthews Northrup for the Boston and Maine Railroad and published in 1913. We note six examples of the 'Season 1913' edition cataloged in OCLC, which are part of the collections at the Boston Athenaeum, Salem State University, the Library of Congress, the Osher Map Library at the University of Southern Maine, the University of Michigan, and the Newberry Library. This map was published in several editions from different years.

Good. Dissected and mounted on linen in twenty-four (24) panels. Original linen exhibits wear in places and slight loss at a handful of fold intersections.