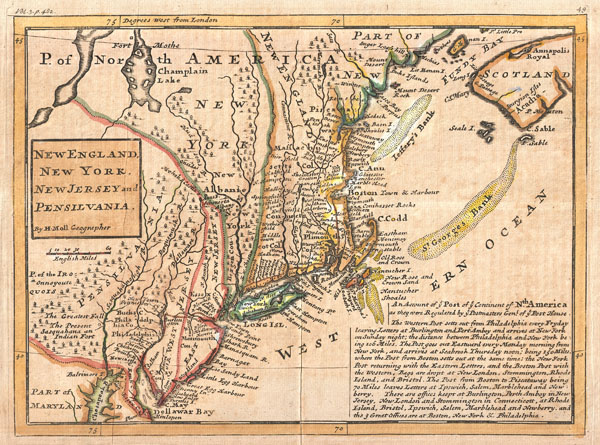 Known among cartographic historic as the 'Post Map,' this is Herman Moll's important 1729 map of New England and the adjacent colonies. Though variants of this map appear as early as 1708, this is the most important of the series due to its thematic focus on the New England, New York, New Jersey Pennsylvania postal system.

Official postal service emerged in the New England colonies around 1639 when the Massachusetts General Court designated a Boston tavern as the official repository for mail arriving from or departing overseas. In 1673 official postal service between New York and Boston was introduced on a monthly basis but it was not until 1691, with the appointment of a Postmaster General to the colonies, that a centralized postal system evolved. The first post route in the Colonies, between New York and Boston, became known as the Boston Post Road and is today still in use as U.S. Route 1.

Moll describes this route in some detail in the lower right quadrant of the map:

The Western Post setts out from Philadelphia every Fryday leaving Letters at Burlington and Pert Amboy and arrives at New York on Sunday night; the distance between Philadelphia and New York being 106 Miles. The Post goes out Eastward every Monday morning from New York, and arrives at Seabrook Thursday noon; being 150 Miles, where the Post from Boston setts out at the same time; the New York Post returning with the Eastern Letters, and the Boston Post with the Western, Bags are dropt at New London, Stommington, Rhode Island, and Bristol. The Post from Boston to Piscataway being 70 Miles leaves Letters at Ipswich, Salem, Marblehead, and New : berry. There are office keept at Burlington, Perth Amboy in New Jersey, New London and Stommington in Connecticott, at Rhode Island, Bristol, Ipswich, Salem, Marblehead, and Newberry, and the 3 Great Offices are at Boston, New York & Philadelphia.

In addition to this maps core details regarding the postal system in America, it also offers additional information on the region including American Indian villages and nations on the west side of the Susquehanna, countless towns and villages, some offshore shoals, and a gross mismapping of Lake Champlain. New Jersey is split into East New Jersey and West New Jersey – an archaic distinction dating to a 28 year period between 1674 and 1702. Delaware is conjoined with Pennsylvania.

Though Barbara McCorkle reports that this map was published in a number of different atlases and histories, this is an early example from the 1729 first edition of Moll's Atlas Minor.

Moll, H., Atlas minor: or a new and curious set of sixty-two maps, in which are shewn all the empires, kingdoms, countries, states, in all the known parts of the earth; with their bounds, divisions, chief cities & towns, the whole composed & laid down agreable to modern history. By Herman Moll, Geographer, (Thos. and John Bowles, London) 1729.