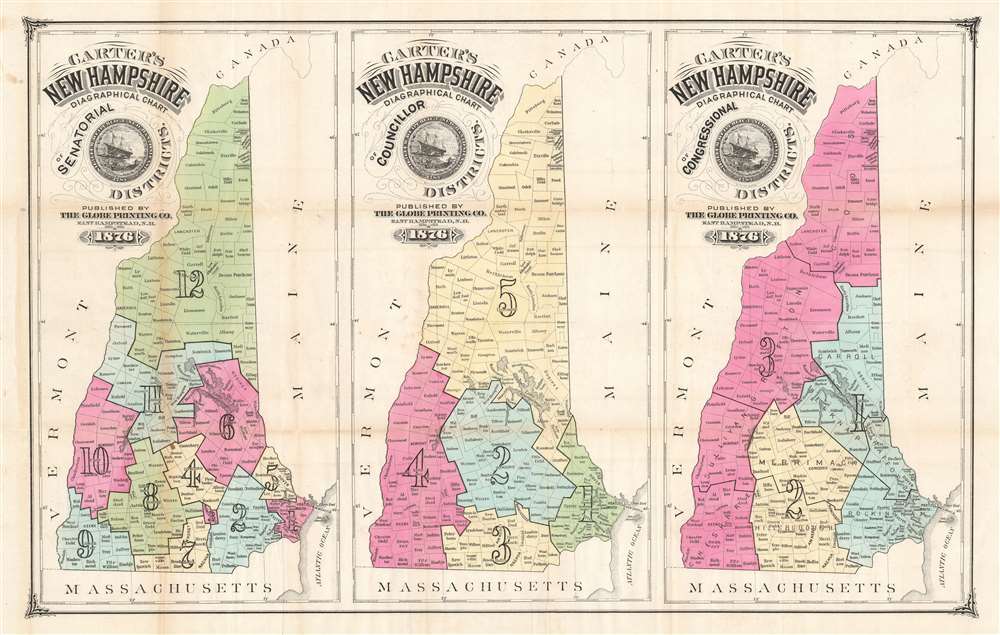 This is an 1876 Hosea B. Carter map of New Hampshire election districts exhibiting early gerrymandering. A series of three maps published on a single sheet, each map depicts the entire state of New Hampshire with a different set of electoral districts. A map delineating Senatorial Districts is situated on the left, with the twelve different districts shaded various colors to allow for easy differentiation. All the counties in New Hampshire are illustrated and labeled, allowing the viewer to know exactly which district their county fell in without much difficulty. The five Councillor Districts are laid out in the central map, with each of the districts again shaded a different color to ease differentiation between them. The map on the right illustrates the three Congressional Districts in New Hampshire with each of the districts again shaded a different color.

A biography of Carter published in 1886 when he ran for state senate reveals that he was in charge of redrawing New Hampshire's electoral districts in 1876. In an early example of gerrymandering, Carter drew the districts in such a way as to give Republicans an electoral advantage. Carter must have been pound of this work, as he self-published this map.

This map was created by Hosea B. Carter and published by The Globe Printing Company of East Hampstead, New Hampshire, in 1876. There are only two known examples of this map in the collections of the Library of Congress and Dartmouth College.

Hosea B. Carter (September 5, 1834 - March 31, 1900) was an American politician and businessman. Born in Hampstead, New Hampshire, Carter attended public schools and 'was a master of a good trade when he came of age'. Soon, however, Carter decided he needed a change of lifestyle and took a job as a canvasser. Carter was a recruiter during the American Civil War for a time and then became the proprietor of a hotel at Camp Stanton, Boxford, Massachusetts in 1862. At some point he was then employed by the secret service and was sent to Canada where he attended the Peace Conference at Clifton House in 1864. He was in Montreal and St. Johns when the St. Alban's Raid occurred (twenty-one Confederate soldiers invaded Vermont from Canada) and testified in the trial of Mary Surratt (accused and convicted of being part of the conspiracy to assassinate U.S. President Abraham Lincoln) the following year. Carter served as superintendent of agencies for New England for the Singer Sewing Machine Company from 1865 to 1870 and ran a small store in Concord, New Hampshire for a short time in 1872. In 1876 Carter was responsible for dividing New Hampshire into councillor and senatorial electoral districts. He served as postmaster of Hampstead from 1874 until 1879 and held the position of railroad commissioner of the Boston and Maine Railroad from 1876 to 1880. Carter ran for State Senator in District 21 in 1886. For years he also served as one of the principal organizers of the State Fair, and it was said that he could 'call nearly every farmer by name from the Canada line to Portsmouth'. Carter married Kate E. Martin with whom he had two children. Learn More...