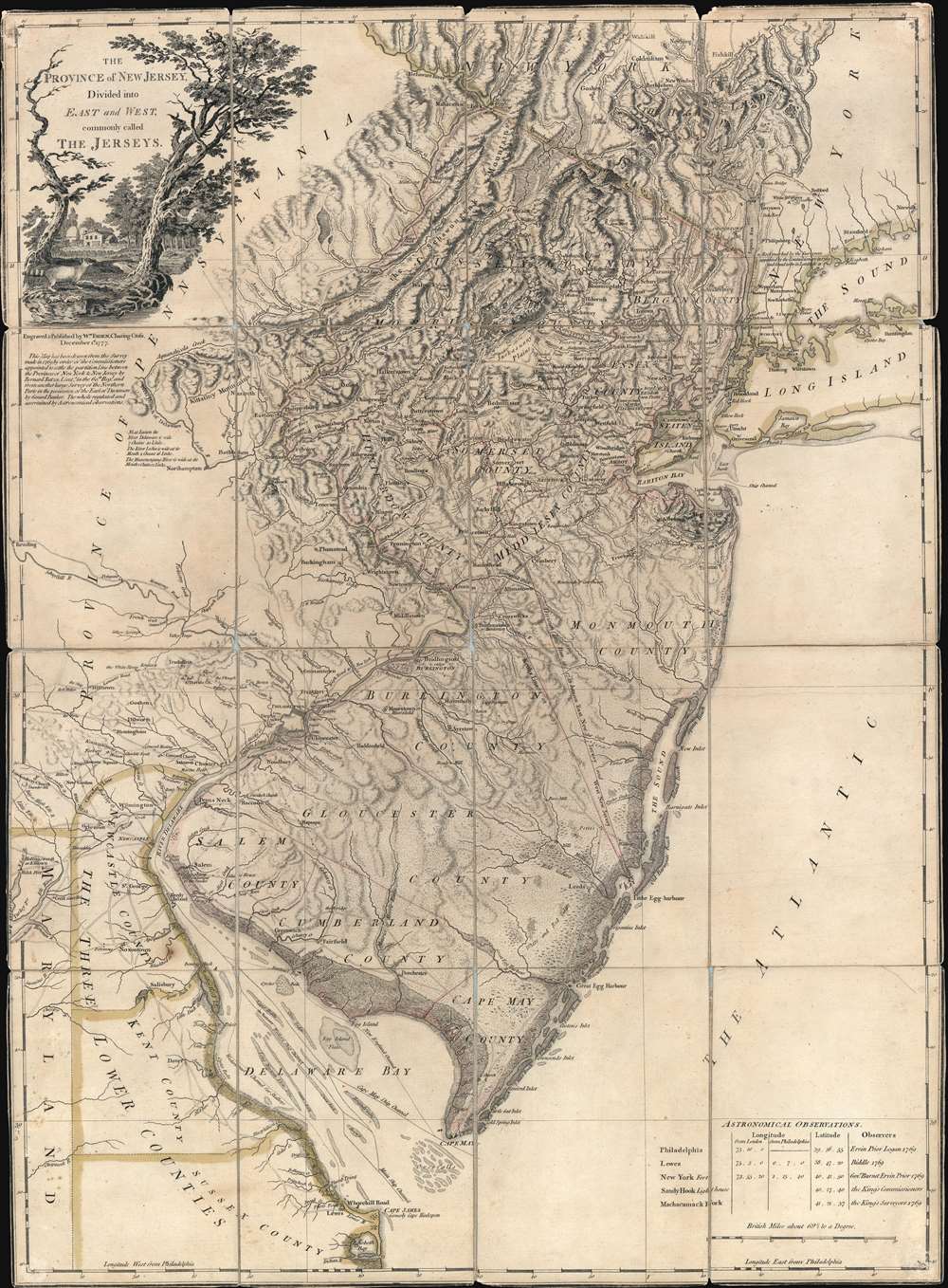 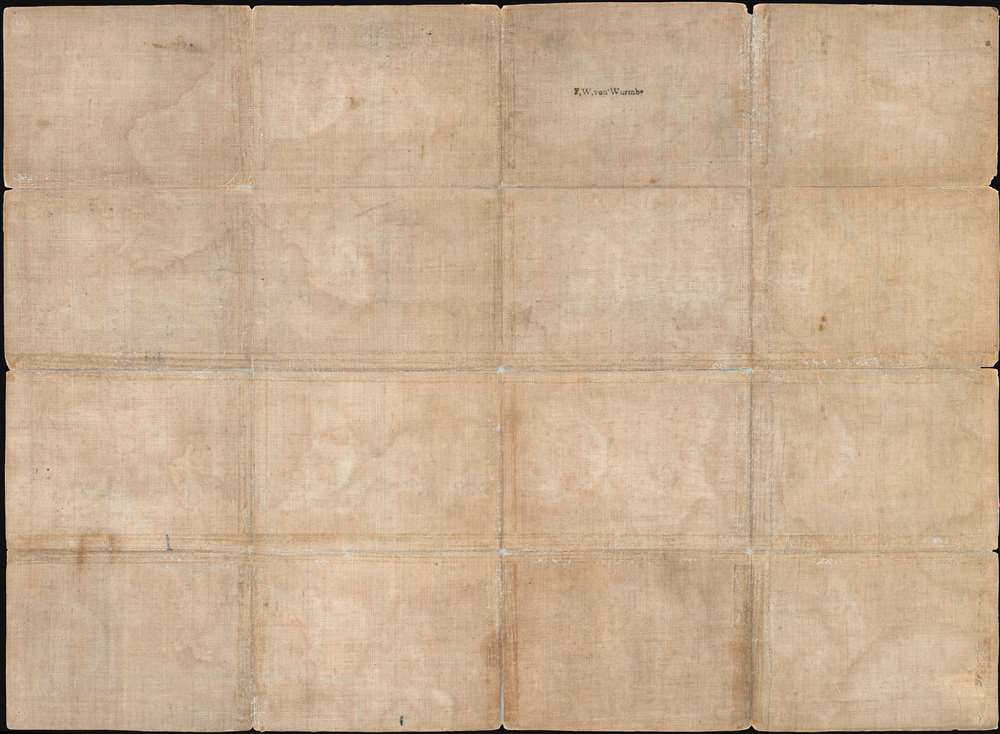 Likely used in the field during the American Revolutionary war.

A most fascinating 1777 first-state first-edition map of New Jersey by William Faden and Bernard Ratzer likely used in the field during the American Revolutionary War by the German Hessian supply officer, Friedrich Wilhelm von Wurmb. While focused on New Jersey, coverage extends to include eastern Pennsylvania, Delaware, and New York City. It captures the state's complex topography, noting the Jersey Highlands and the Palisades in the north and the Pine Barrens and coastal marshes in the south. New Jersey is here broken down into 12 counties, as they existed at the time, as well as multiple towns and roads. Note that there are no coastal routes through Monmouth County, requiring travelers instead to travel inland to Crosswicks, then south east to Egg Harbor, before continuing south. There is also an annotation regarding the settlement of Fort Helsingburg, near Salem on the Delaware River, where in 1640, Swedish settlers attempt to establish a colony.

The stamp on the verso identifies the original owner of this map as Friedrich Wilhelm von Wurmb (June 14, 1744 - September 18, 1827), providing provenance as well as a glimpse of its original use and purpose. Wurmb, during the American Revolutionary War, was a Colonel Hessian Leib Infantry in the 2nd Division under General von Knyphausen. The British contracted more than 30,000 Hessian mercenaries to help suppress the Rebels. In mid-June 1778, Wurmb's division was responsible for transporting the British army's massive baggage train in an overland march across central New Jersey from Philadelphia to New York. As the largest and most detailed map of New Jersey available at the time, we can assume with some confidence that this is the map he used for that critical mission.

The underlying surveys for this map were completed in 1769 by Bernard Ratzer, a German military surveyor in the British New American Regiment famous for his two large Revolutionary War Era maps of New York City. Following the French and Indian War he was appointed by King George III's New York-New Jersey Boundary Commission to resolve the long-disputed boundary between the two colonial provinces. Samuel Holland and William De Brahm, the Commission heads, agreed on the boundary in 1764, but it was not properly surveyed until Ratzer completed his assignment in 1769. Accordingly, the 'Boundary as settled by the Commissioners in 1759' runs from the conjunction of the Delaware and the Mahacamack (Neversink) River to a point on the Hudson River marked as 'Rockland', roughly corresponding to modern day 'Rockleigh'.

Two other significant boundary lines are indicated, dividing the state on a rough north-south axis. These are 'Keith's Line in 1687', surveyed by George Keith (c. 1639 - 1716), surveyor general of East Jersey; and the 'Division Line Run in 1743 between East New jersey and West New Jersey', surveyed by John Lawrence (1709 - 1794) and generally known as either the 'Quintipartite Line' or 'Lawrence Line'. This latter line was run by corporation of five Quaker partners, among the William Penn, who acquired Lord Berkeley's properties in New Jersey in 1676 and is still used today to resolve boundary and property disputes.

Copies of the documents that Ratzer submitted to the Commission in 1769 survive at Harvard and present a far simpler map, that while geometrically accurate, lacks roads, most cities, and other details. We are also aware of more detailed Ratzer maps surviving in manuscript in British collections, suggesting that there may be a more detailed map of New Jersey by Ratzer's hand that is now lost.

Although Faden primarily compiled the map based upon the work of Ratzer, for the northern parts of New Jersey, he turned to surveys completed by Gerard Bancker (February 14, 1740 - January 1799). Bancker was descended from early Dutch settlers, including Johanns de Peyster (1666 - 1719), the 23rd Mayor of New York City. He worked as City Surveyor of New York in the late 18th century, but no record survives of his work in New Jersey - which we can only assume was extensive although never published. Faden acquired Bancker's surveys from John Murray, the Earl of Dunmore and former governor of Virginia, who collected a manuscript copy while traveling in New York. That manuscript is unfortunately not known to have survived.

This map was originally published, as here, in London in 1777 by William Faden. There are three known states: this, the first state bearing the imprint 'Wm. Faden, Dec. 1st 1777'; a second state issued in 1778 with the imprint 'Second Edition with considerable improvements'; and a third state issued in 1794, identical to the second, but printed on 'J. Whatman 1794' woven paper. The map was issued both separately, as here, and in Faden's landmark 1777 work, The North American Atlas. Due to its publication in the popular Faden atlas, this map is well represented in institutional collections. Such examples are usually identifiable by manuscript page numbers and fold metric. Separate issue examples, as here, are far rarer and the unique provenance evident here, tracing the map to field action during the war, make this piece unique.

Average. Map is dissected and mounted on original linen, which bears the original owner's personal stamp. Old color. SOme edge wear, especially along old folds. Some of the old linen backing is worn and split here and there on fold lines. Could be reinforced, we have avoided all restoration given the map's significant provenance.