1851 U.S. Coast Survey Chart or Map of the Harbor of New London, Connecticut 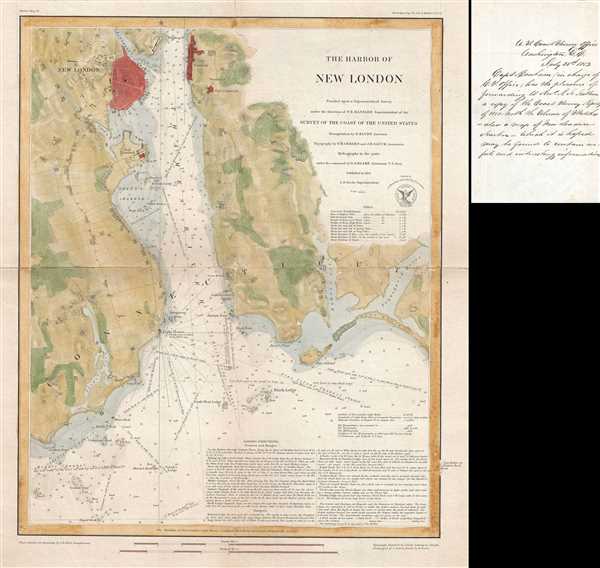 1851 U.S. Coast Survey Chart or Map of the Harbor of New London, Connecticut

This is a beautiful and scarce 1851 electrotype map or nautical chart of the harbor of New London, Connecticut issued by the U.S. Coast Survey. The map, published separately as a presentation copy, covers the city and harbor along the mouth of the Thames River and includes parts of Groton. Extends from Winthrop’ Cove south to Goshen Point and east to Poquannock River and Bushy Point Beach. Features beautiful inland detail, with fields, forests, streets and buildings noted. The map offers copious notes and sailing directions including information on tides and dangers. Several lighthouses are also noted. Depth soundings are noted throughout in feet.

This map is accompanied by a manuscript note written in fine hand. It is dated July 23, 1853 and reads:

Capt. Benham (in charge of U.S. Office) has the pleasure of forwarding to Revd. R. N. Hallem a copy of the Coast Survey Reports of 1851 – with the volume of sketches – also a map of New London Harbor- which it is hoped may be found to contain useful and interesting information.

Originally published in 1848, on the basis of the note attached, this particular map was most likely issued in 1851. Trigonometrical survey for this chart was conducted under the direction of F. R. Hassler. Triangulation by E. Blunt and topography by F.H. Gerdes and J.B. Gluck. Hydrography was done by the party under the command of G.S. Blake. Electrotyped by S. Siebert. The whole was completed under the direction of A. D. Bache, one of the most influential and prolific Superintendents of the U.S. Coast Survey.