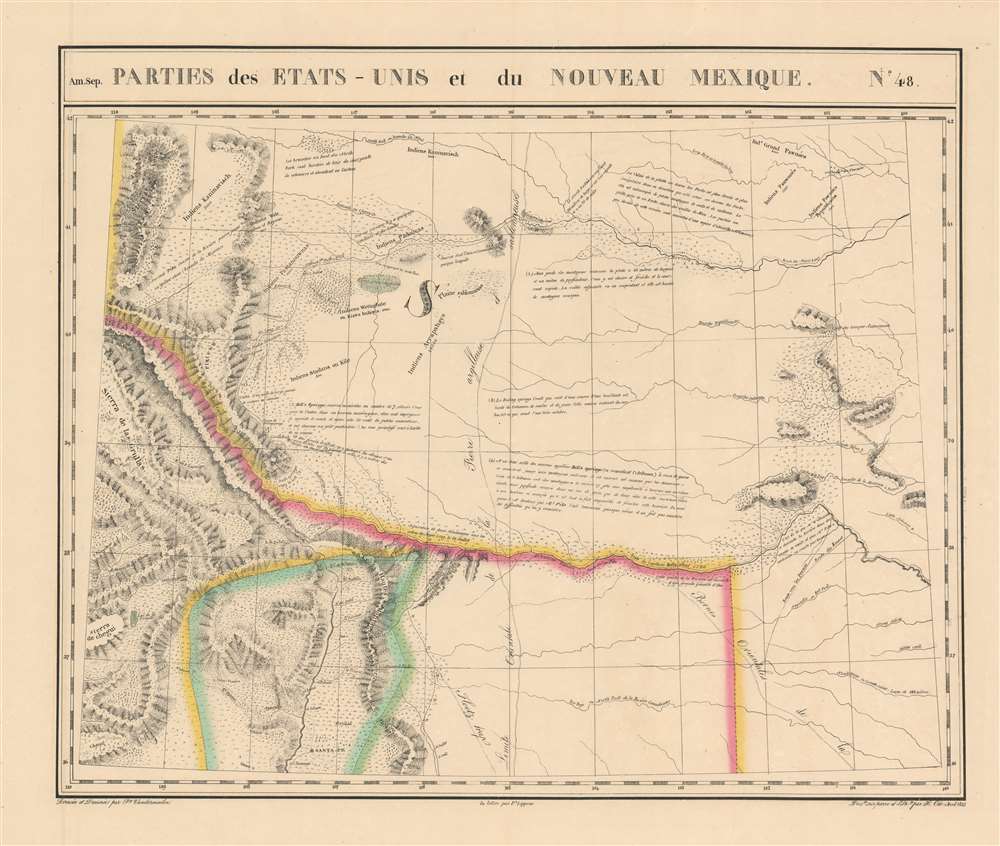 The First Detailed, Modern Atlas Map of Northern New Mexico and Colorado and the Best Map of the Long Expedition.

This is 1827 Vandermaelen map of the American-Mexican frontier of the Missouri Territory, shown during a period of active exploration. It was the largest-scale map of this region produced to date - 'no mapmaker had previously attempted to use such a large scale for any western American area.' (Wheat). Like all of the maps from Vandermaelen's Atlas, it is the also the first map of the region executed in lithograph.

The map shows what would become Colorado, New Mexico and Nebraska. Santa Fe is shown along with neighboring villages, including Taos. Castle Rock in Colorado is shown, near Bell's Springs (now occupied by Bell's Springs.) The map includes tribal routes, cities and settlements, and notes the region that would eventually become Yellowstone Park. New Mexique, it should be noted, refers to the region under Mexican government: the northern part of the map shows part of the Missouri Territory, in particular the areas that would become Nebraska and Colorado. The map captures the region in its frontier period - many Native American tribes are shown with their populations noted. There are some notes pertaining to the Pike expedition, and a very full treatment of the 1820 expedition of Stephen Harriman Long.

The track of Long's 1820 expedition up the Platte River to the Rocky mountains is shown on the map, which - though not the first to show the journey - is the best-focused cartographic document of it. Due to the large scale afforded by this map, the expedition's track is shown in comparable, or even greater detail than Long's own (much smaller) map published with his report in 1823, including many descriptive texts reporting the geology of the land as well as the populations and disposition of the Native American tribes encountered.

This map appeared in the fourth part, 'Quatrième partie, Amér. sept.' of Vandermaelen's Atlas universel de géographie physique, politique, statistique et minéralogique. The atlas was produced in one edition in 1827; only 810 complete sets were sold. The full set of six volumes appears in eleven institutional collections in OCLC; the 4th volume alone is listed in 9. This map is listed as a separate only in the Clements Library, New Mexico State University, the University of Texas at Arlington, and the Amon Carter Museum of American Art.