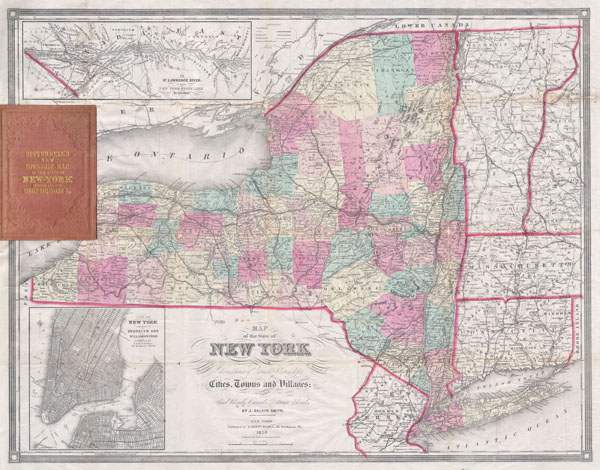 This is a rare pocket issue map of the state of New York by Calvin Smith and J. Disturnell. Depicts the entire state of New York as well as Vermont and Connecticut and parts of Massachusetts, New Hampshire and New Jersey. An inset in the upper left quadrant features the course of the St. Lawrence River from New York to Quebec. Another inset in the lower right features Disturnell's plan of New York City (to 32nd st) with parts of Brooklyn and Williamsburg. Designed to be folded into an attached red linen binder stamped with a title in gold gilt. The binder has been removed for conservation purposes, but is included with the piece. Drawn by Calvin Smith. Engraved on steel by Sherman & Smith. The copyright, bottom center, reads,' Entered according to Act of Congress in the year 1847 by J. Disturnell in the Clerks office of the District Court of the southern district of New York.'

Good condition. Minor wear on original folds and several verso repairs. Some damage and discoloration where the map was originally glued into the binder. Removed from original red linen (included) for conservation purposes.