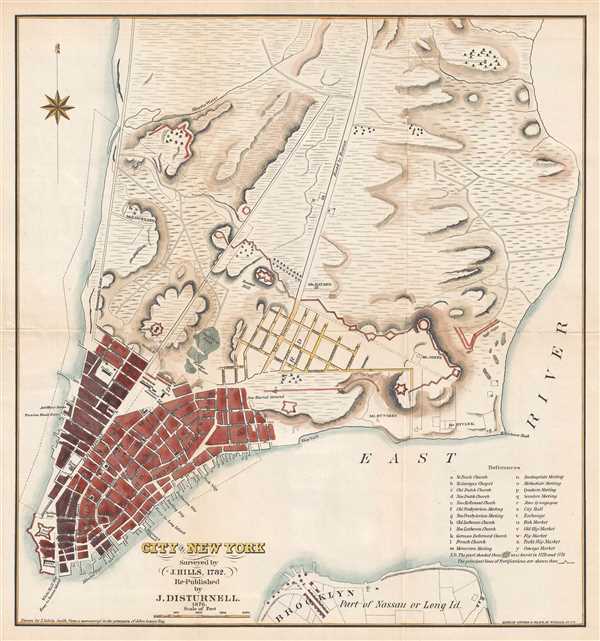 This is an 1876 John Disturnell republication of a 1782 J. Hills city map or plan of New York City. The map depicts the lower half of Manhattan and a small part of Long Island, including Brooklyn. Most of Manhattan is undeveloped. Streets are labeled from the Battery to Chambers Street and along Bowery from Bayard Street to Hester Street. The Bowery then turns into the 'Road to Boston', along which there are a few settlements, including the residence of Mr. Bayard. In New York proper, numerous streets are labeled, with Broadway dominating the pseudo-grid. Wall Street, Broad Street, and Cortland Street are among the labeled streets, and Trinity Church and Bowling Green are also labeled. 'The College' (i.e. King's College), today's Columbia University, is also labeled. Greenwich Lane runs along the Hudson River side of Manhattan, along which Mr. Lispenard's residence is located a short distance north of the city. Twenty-five locations are identified alphabetically, and the corresponding list is situated in the lower right corner. A note below the list informs the viewer that the darkly shaded areas in lower Manhattan were burned in 1776 and 1778.

This map was drawn by J. Calvin Smith, printed by Snyder and Black, and published by John Disturnell in 1876.


John Calvin Smith (1809 – June 11, 1890) was an American surveyor and geographer active in New York during the middle part of the 19th century. He was a charter member of the American Geographical and Statistical Society (American Geographical Society). He worked with other important New York cartographers including John Disturnell, George Sherman, and Samuel Stiles, with whom he often published under the Stiles, Sherman & Smith imprint. Stiles may have introduced Smith to J. H. Colton, who acquired many of his map plates in 1853. Most of Smith's maps focus on New York counties, but he also issued maps of the United States, Illinois, Texas, and the California gold fields. Despite being an important and prolific cartographer, much of his personal life and history are shrouded in mystery.