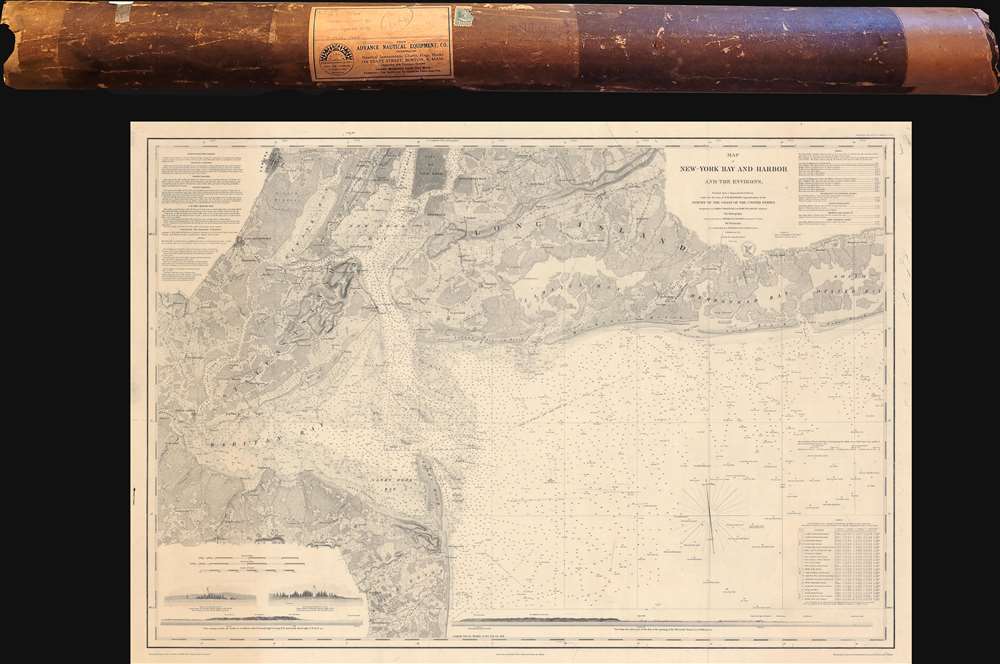 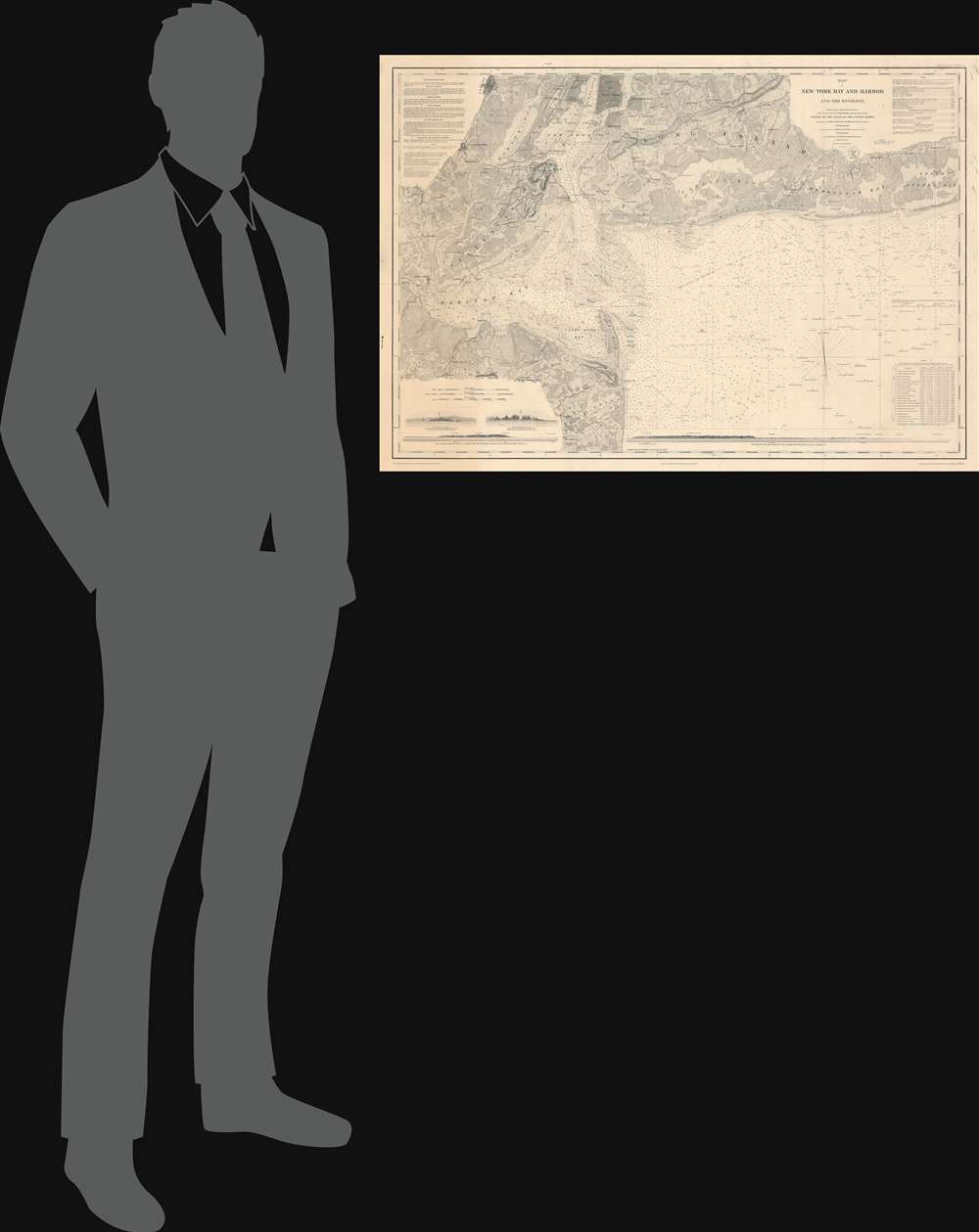 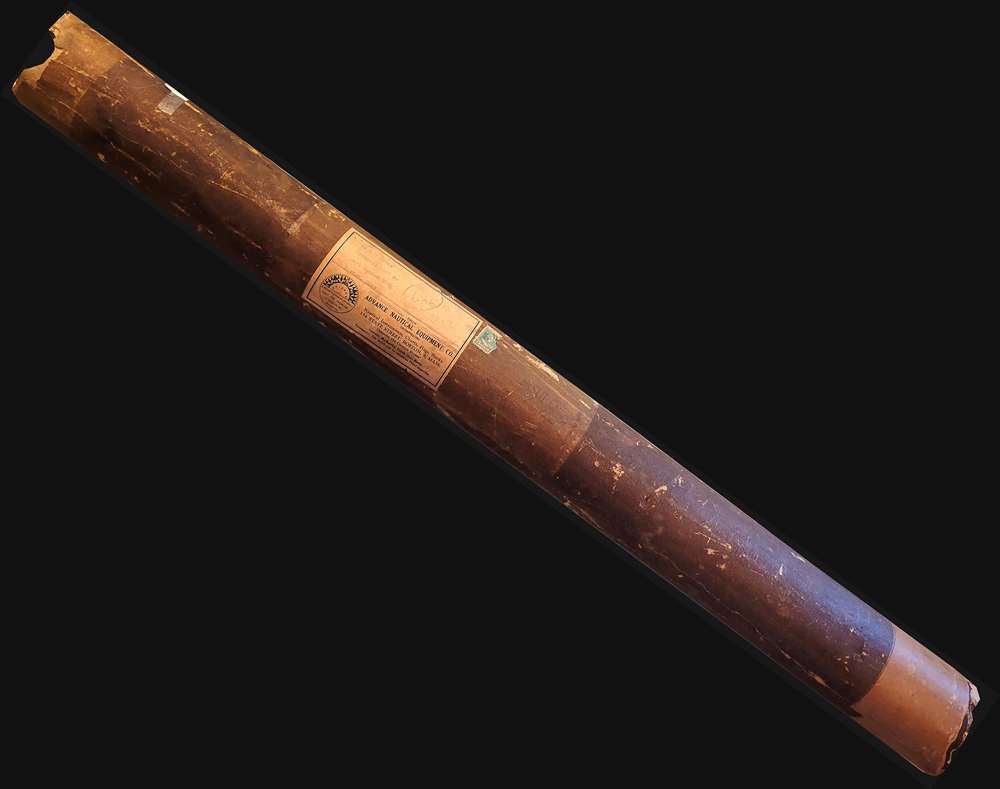 This is the 1845 first edition of the U.S. Coast Survey nautical chart or maritime map of New York Bay and Harbor and its environs - uniquely accompanying its original mailing tube. The chart depicts from Newark to South Oyster Bay and from the City of New York to Sandy Hook and Black Point.

Situated along the bottom border, several profile views intended to help mariner recognize visible coasts. These include the Sandy Hook Lighthouse from different directions, and a view of the opening of the Old North Channel. A table containing information concerning the direction and force of currents throughout New York Bay and Harbor is included on the lower right. Sailing directions are included in the upper left, while other notes pertaining to the chart's use are included in the upper right.

This chart was produced from a survey directed by Ferdinand Rudolph Hassler, the first Superintendent of the United States Coast Survey, with triangulation, topography, and hydrography work completed by several teams of surveyors and their assistants, and published by the United States Coast Survey in 1845 when A. D. Bache was superintendent. This map is well represented in institutional collections, but it is scarce on the private market.


Andrew Atkinson Humphreys (November 2, 1810 - December 27, 1883) was a career U.S. Army officer. Born in Philadelphia, Pennsylvania, Humphreys came from an illustrious family. His grandfather is remembered as the 'Father of the American Navy', because he served as the chief naval constructor from 1794 - 1801, and designed the first U.S. warships, including the USS Constitution. Samuel Humphreys, Andrew's father, designed the USS Pennsylvania, the largest and most heavily armed ship at the time. Humphreys graduated from Nazareth Hall (modern day Moravian College and Theological Seminary), then entered the United States Military Academy at West Point. Humphreys graduated on July 1, 1831, was commissioned as a second lieutenant, and joined the Second Artillery Regiment. in South Carolina. In the summer of 1836, Humphreys and his regiment went to Florida to fight in the Seminole Wars. Disgusted by the the war's mismanagement, Humphreys resigned his commission on September 30, 1836, and became a civil engineer. Nearly two years later, on July 7, 1838, Humphreys rejoined the U.S. Army as a 1st lieutenant in the Corps of Topographical Engineers. Humphreys began an extensive survey of the Mississippi River Delta in 1850, a project that lasted ten years. He also worked on the Pacific Railroad Surveys from 1853 - 1857. During these years just before the American Civil War, Humphreys earned a glowing reputation as a scientist both nationally and abroad. Humphreys was promoted to major at the beginning of the American Civil War and became the Army of the Potomac's chief topographical engineer. During the war, Humphreys fought beside McClellan during the Peninsula Campaign, when he was prmoted to brigadier general, given command of a division, and saw combat at the Battle of Antietam, the Battle of Fredericksburg, and the battle of Chancellorsville. He was transferred to a different division just before the Battle of Gettysburg, where, because of poor command decisions by his immediate superior, his division was annihilated. Humphreys was promoted to major general after the Battle of Gettysburg and consented to becoming General Meade's chief of staff, a position he had been offered in the days before Gettysburg. He served in this position until November 1864, when he was given command of the II Corps during the Siege of Petersburg. He held this command until the end of the war and his corps played a part in the Appomattox Campaign. After the war, Humphreys became Chief of Engineers in 1866, a position he held until he retired on June 30, 1879. Learn More...