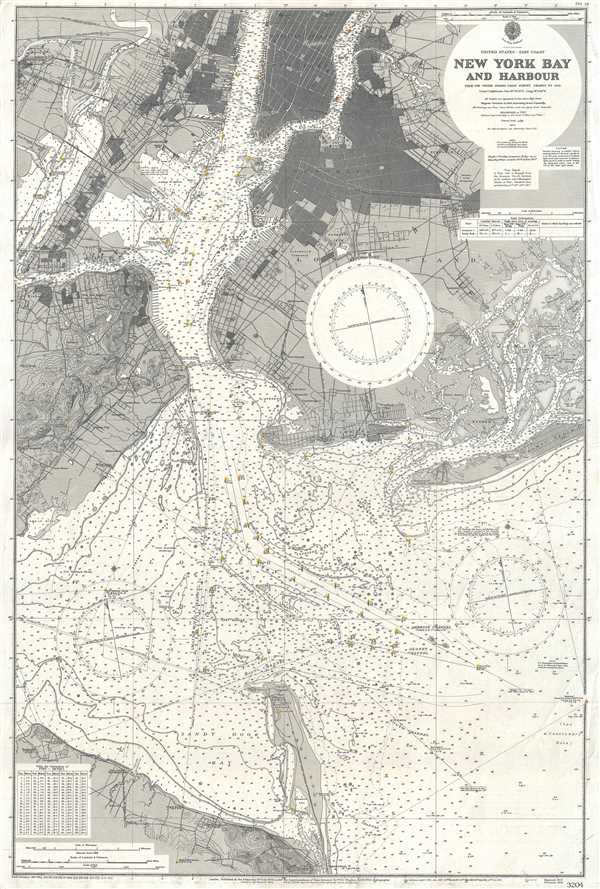 This is a 1928 British Admiralty nautical chart or maritime map of New York Bay and Harbor. The map depicts the region from New Jersey and Staten Island the Long Island and from Manhattan Island, Long Island City, and Hoboken, New Jersey to Sandy Hook, New Jersey. Featuring a detailed depiction of New York City, Manhattan's grid is illustrated, along with that of Brooklyn. Several Brooklyn neighborhoods are labeled, including Green Point, Red Hook, Flatbush, Bay Ridge, Gravesend, Sheepshead Bay, Coney Island, Canarsie, and Bushwick and Long Island City in Queens. A detailed illustration of Prospect Park is present in Brooklyn as well, close to Greenwood Cemetery. Numerous small communities are also labeled on Staten Island, as well as Jersey City, Bergen, Bayonne, and Newark, New Jersey. Myriad depth soundings are included throughout New York Harbor and Bay, along with many beacons, which are noted by yellow dots. The major shipping channels are illustrated and labeled, and navigational hazards, such as shoals, banks, and various other hazards, such as submerged pipelines and cables, are also noted.

This chart was published in several editions, with the present example dating to the 1926 edition. A series of small corrections have been made and are dated to 1928.