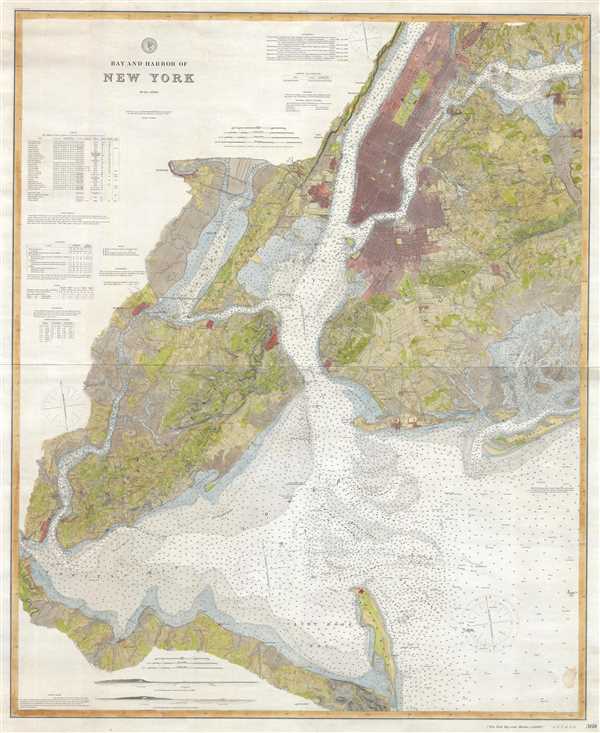 This gigantic wall map is the highest expression of the Coast Survey's work in and around New York City and Harbour.

This is a rare and dramatic 1889 wall map version of the U.S. Coast Survey nautical chart or maritime map of New York City and Harbor. Like most of its smaller predecessors, this map covers from Sandy Hook to Northern Manhattan including all of Staten Island and Brooklyn, as well as parts of Queens, the Bronx, and New Jersey. There is extraordinary detail throughout including inland to the level of individual buildings, and nautical detail in the form of countless soundings and notes. The area surrounding the map proper is tilled with a wealth of practical information for the mariner, including notes on tides, lighthouses, currents, buoys, etc.

The U. S. Coast Survey began working on its chart of New York Harbor under the its first superintendent Ferdinand Hassler. It was continued by all of his successors but most particularly A. D. Bache who oversaw the completion of that harbor's first detailed survey. Most of the work seen on this map dates to the Bache years, despite significant updates under later directors.

The present map was published in 1889, after the Coast Survey had merged with the Geodetic Survey, becoming in the process the U.S. Coast and Geodetic Survey. It was published under the tenure of T. C. Mendenhall as chart no 369. It is an independent issue on thick stock published for nautical use. At the time, it retailed of 75 cents, but prices have increased considerably since that time.

Very good. Some wear to margins. Contents clean. Minor spot lower right quadrant.
Looking for a high-resolution scan of this?