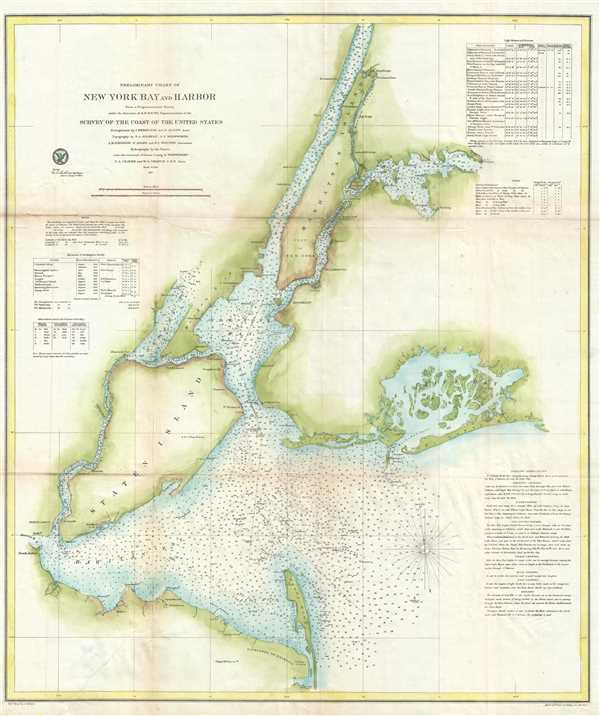 This is a rare 1857 U.S. Coast Survey nautical chart or maritime map of New York City, it's harbor, and environs. One of the first 19th century charts to depict New York City as we know it today, it illustrates Manhattan, Queens, Brooklyn, the Bronx and Staten Island. Jersey City, Newark and Hoboken, New Jersey are labeled. This is one of the earliest states in the development of this particular chart series, and inland details, which are developed in later charts, are almost entirely absent in this edition. This chart contains a wealth of practical information for the mariner including myriad depth soundings in New York Bay, up the East and Hudson Rivers. Other practical information includes a table on variations of the magnetic needle and notes on the use of the map along the left border, a table of lighthouses and beacons in the upper right corner, with a tide table immediately below it. In the lower right corner, sailing directions are included for Gedney's Channel, 21 Feet Range, Old South Channel, Swash Channel, Hook Channel, and East Channel.

The triangulation for this chart was prepared by J. Ferguson and E. Blunt and the topography by H. L. Whiting, S. A. Gilbert, A. M Harrison, H. Adams, and A.S. Wadsworth. The hydrography was accomplished by R. Wainwright, T. A. Craven and W.G. Temple. The entire production was supervised by A. D. Bache, Superintendent of the Survey of the Coast of the United States and one of the most influential American cartographers of the 19th century. The map was published in the 1857 edition of the Superintendent's Report.